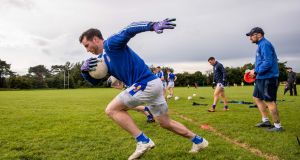 The lockdown period at the start of the summer helped facilitate Michael Darragh Macauley’s recovery from injury. File photograph: Inpho

The prospect of playing the 2020 championship behind closed doors is a “no-brainer”, says Dublin footballer Michael Darragh Macauley, who given the current circumstances would just as soon play in front of Dessie Farrell and his dog as he would 80,000 people in Croke Park.

While the GAA are restricted to playing all games behind closed doors until September 13th, at the earliest, Macauley believes that even if attendances for the championship are capped back at 200 people that’s better than nothing.

“But if that has to be zero, Dessie Farrell and his dog, then that’s what it is. From a players point of view, I haven’t come across anyone who wants it any other way. Lads are happy to play, everyone I know, club and county, have put in a shift over the last while. We were all doing our 5ks, all that, everyone in the country was in the same boat, not just inter-county athletes.

“And it’s nice to have a little endgame in sight, with that sort of stuff. So as far as I know, anyone I’ve talked to just wants to play ball, be it in front the dog, or 80,000 people.”

Speaking on Monday ahead of AIB’S The Toughest Summer documentary, which airs on Tuesday night and looks at some of the challenges presented to players during the pandemic, Macauley also admits the lockdown period at the start of the summer helped facilitate his recovery from injury.

“I wasn’t due to play (in the league), and was probably aiming for the first round of the championship anyway. So it fell very differently for me, it was nice to have no huge goalpost in my face, and the whole lockdown just ended up being an extended period of rehab.”

The seven-time All-Ireland winner, who turned 34 last month, is currently preparing for a quarter-final tie with his club, Ballyboden St Enda’s, who are set to take on the winner of Raheny and Oliver Plunkett’s/Eoghan Rua this Sunday, that game was postponed because of concerns around Covid-19.

Taoiseach Micheál Martin, speaking on RTÉ radio’s Today with Claire Byrne Show, also expressed his hope that the 2020 championship could still proceed as planned, while GAA president John Horan also confirmed that while the association supports the running of inter-county championships this year, if they are to take place, they won’t be held up to accommodate counties who find themselves in any coronavirus lockdown.

Speaking on RTÉ Radio 1’s This Week programme, Horan acknowledged the situation: “I think everybody getting involved in this will actually take on board and we will have protocols in place that if a county goes down, because of the narrow timeframe in which we are running the competition, they will just have to step aside.”