Leinster U-17 round-up: Meath get the better of Westmeath; Offaly edge Wicklow 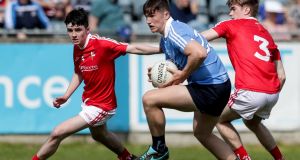 Holders Dublin made a winning start in their Electric Ireland Leinster Minor Football Championship campaign after defeating Louth by 3-15 to 1-7 in their Group 1 clash in Parnell Park on Monday afternoon.

The first half was particularly tight, with Louth enjoying an early advantage through a brace of Daire Nally frees. Nally impressed in the second quarter with two fine points from play to keep his team on the front foot.

However, the hosts began to show greater fluency as the contest evolved, and two Seán Foran scores – and points by captain Enda Cashman and Matthew Dunne – inched Dublin 0-8 to 0-7 ahead at the break.

Although Dunne doubled Dublin’s lead in the 37th minute, corner-back Tom Jackson brought Louth back into contention as he fired home past Simon Murphy a minute later with Dublin’s defence marked absent.

However, it proved Louth’s final score of the game as Dublin regained their authority through a Mark O’Leary goal in the 48th minute.

It proved a procession from that point as the hosts cruised home through late goals from Conor Murray and Liam Dunne.

Elsewhere in Group 1, goals in either half by Cian McBride and Luke Kelly saw Meath comfortably get the better of Westmeath by 2-20 to 2-7 in Cusack Park.

Mikey Cunningham’s goal proved decisive in Aughrim as Offaly edged Wicklow by 1-13 to 0-14.

1 Six Nations: Ireland are contenders but England still the team to beat
2 Owen Doyle: Creeping professionalism of schools rugby a threat to the game
3 In Donegal Michael Murphy is seen, simply, as a godsend
4 Gary Neville in Qatar an exercise in semi-journalism
5 Mike Catt hopes to have Irish backs purring in Six Nations
Real news has value SUBSCRIBE