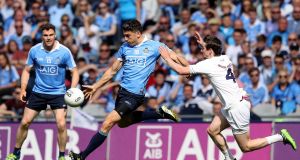 Bernard Brogan was a force off the bench for Dublin in their Leinster final win over Kildare. Photograph: Tommy Dickson/Inpho

Dublin don’t want to hear your story. They’re grand, thanks. You keep doing what you’re doing, trying what you’re trying. They’ll keep on rolling, collecting medals like they’re made of magnets. They swept up their seventh Leinster title on the bounce here, their 12th in 13 seasons. Kildare are a coming side but this level of quality is above their station.

The margin in the end was nine points, making it the first time since 2013 that Dublin have won a game in Leinster by less than double-digits. Kildare 1-17 was the highest score Dublin have ever conceded in a Leinster final and would have won 80 per cent of all the Leinster finals ever played.

And yet it wasn’t enough. Nowhere near. Dublin banged in two goals inside a minute early on and never looked in any real trouble thereafter. Dean Rock slipped his home after 10 minutes, James McCarthy stole in for his pretty much in the next breath and just like that, Dublin had a 2-3 to 0-1 advantage to play with. It’s hard to play the Dubs on level terms, never mind gifting them two early goals.

That said, Kildare gave them plenty of it. In most Leinster finals over the past decade, a one-two punch like that from Dublin would have been all she wrote. Kiss, kiss. Bang, bang. Beckon the seagulls from rafters and let’s get into the evening for the last of the sun.

But Kildare have more about them than the usual bums of the month. They didn’t get it done here in the end but they have enough of the elements to suggest that they have nothing to fear from Monaghan or Armagh in the fourth round of the qualifiers. After only scoring a single point in the opening 20 minutes, they outscored Dublin from there to half-time by 0-9 to 0-4.

Keith Cribbin shook off his early lethargy to bomb through the middle of the Dublin rearguard, blazing a shot over the bar on 20 minutes once he got a sight of Stephen Cluxton’s eyes. Cathal McNally snapped a couple of quickfire points, Kevin Feely popped a free. Johnny Byrne landed a gorgeous score, Daniel Flynn one-upped him with a magnificent effort on the run from the left sideline.

And so they went in at the break only 2-8 to 0-10 behind. If they were to get anything from the game, they needed to keep on keeping on after the restart. But Dublin came out like a team who knew they had their warning. They are the Dubs. You are not.

Bernard Brogan was on the field as a sub having replaced the black-carded Rock and with Con O’Callaghan in sparkling form, the Dublin attack got to work. O’Callaghan had an extraordinary day, scoring 0-12 from 13 shots with six points from play. Brogan knocked over five from play as well in his 45 minutes on the pitch. Unstoppable stuff.

In the first quarter-hour after the break, Dublin ransacked the Kildare defence, outscoring them 0-8 to 0-2 in that spell. That was the game. The key moment came in the middle of that, when Kildare managed to spring Daniel Flynn through on goal in front of the Hill on 42 minutes.

Six points separated the sides at that point and had Flynn found the bottom corner - or any corner - Kildare would have had something to aim at. But his shot was straight at Cluxton and Dublin were out the gap. They scored five of the next six points and it was target practice long before the end.

Kildare won’t be discouraged. They came to Croke Park and got fine displays out of the likes of Feely and Byrne and by no means is their summer over. In his acceptance speech after wards, Cluxton said, “We love a bit of competition in Leinster - and please God youse are the ones who are going to provide it.”

You’d nearly think he meant it too.