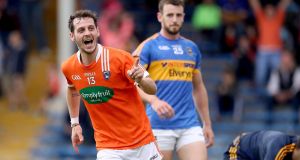 Jamie Clarke celebrates his late goal for Armagh which clinched victory over Tipperary in the All-Ireland SFC 3B qualifier clash in Thurles. Photograph: Tommy Dickson/Inpho

Tipp were All-Ireland semi-finalists last year but saw their 2017 campaign brought to an early halt by the visiting Orchard County.

A crippling injury list caught up with Tipp and while Michael Quinlivan was named to start, the All-Star forward was clearly not fully fit. He did manage to crash home a superb 38th-minute goal to hand Tipp a 1-10 to 0-9 lead – but Armagh worked their way back into contention and ran out deserved two-point winners.

Neilan’s poor display was the main talking point after the game and Kearns didn’t hold back. The referee needed a Garda escort off the pitch at full-time as the Tipp fans in the 6,823 attendance made their feelings known.

But Neilan was bad for both teams and he chalked off a perfectly good Gavin McParland goal for Armagh in the first half.

Neilan failed to play a good advantage and he enraged Tipp in the second half, calling back Philip Austin when he was in a good position and advancing on the Armagh goal.

But what annoyed Kearns more than anything was the suggestion from Neilan that his players were diving throughout the game.

Kearns said: “Look, I’m not going to comment too much on the referee but I’m very disappointed . . All I could see from him was this [diving motion]. My players don’t dive, and he was calling dives all over the pitch. “I just could not understand that.

“He didn’t cost us the game, Armagh deserved to win the match, but I would be disappointed with his display.”

Kearns was correct in his assertion that Armagh were deserved winners.

Trailing by 0-8 to 0-10 at half-time, the visitors were a much-improved outfit in the second half, playing with the wind and putting huge pressure on Tipp by pushing up on them.

The Orchard men finally got ahead for the first time with nine minutes left and while Tipp hit back to level, Jamie Clarke’s classy goal in the final minute of normal time was the clinching score.

Armagh hit Tipp with a brilliant counter-attack and Clarke kept his cool, dropping the ball to the turf before slotting home with a soccer-style effort.

Quinlivan had a couple of late frees blocked as Tipp tried desperately to find a way back but Armagh held on to book a spot in the next round.

It was also a sweet revenge mission for Kieran McGeeney’s charges, who’d lost to Tipp in a winner-takes-all Division Three promotion shoot-out at the Athletic Grounds in April.

Defeat leaves Kearns with some thinking to do as he mulls over whether or not to take charge for a third season and the Kerry man hinted that some things will need to change if he’s to continue.

He said: “There were things that I wouldn’t be happy with but they’re all stuff to be talked about and I’ll have to sit down and talk with all the stakeholders.

“I’ll talk to players, I’ll talk to the football board, the county board and obviously my own family, and consider what’s best for Tipperary football.

“I’ll take a couple of weeks off completely and then we’ll start the process. “Hopefully, in five or six weeks, we’ll make a decision.”

Kearns will also touch base with former captain Peter Acheson, who was in Dubai this year, to see if he’s interested in a return.

Colin O’Riordan, in Australia with the Sydney Swans, is another player on his long-term radar, along with Steven O’Brien and Séamus Kennedy, who are currently with the senior hurlers.

Kearns added: “When I took the job two years ago, I thought I had a load of players, which I didn’t have when I went in to do the job.

“If I’m taking it on for another two years, I’m definitely going to find out, prior to taking it, what exactly I have. That’s only fair and anybody would do that. You have to see what you’re working with.”

For Armagh, this was another encouraging outing, as Niall Grimley, Brendan Donaghy, Mark Shields and Aidan Forker produced big displays.

Selector Paddy McKeever hailed the character of his players, as they fought back from a four-point deficit to win by two.

He said: “It is born out of similar losses that they’ve had, some of the collective criticism they have received from all quarters. They were going to define what their year was about.

“Again, it’s only one step but we have rallied around each other and picked each other up. Game by game we are improving but again we are going up another level. There is improvement there but we have a lot of work to do.

“It was good value for the supporters watching it but it’s nervy stuff.”