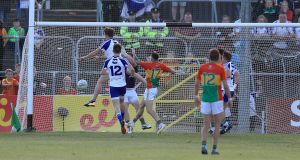 Monaghan footballers had to overcome a fiercely committed challenge from Carlow in the Round 3 All-Ireland Qualifier at Netwatch Cullen Park on Saturday.

It was only in the final 10 minutes that the experience of Malachy O’Rourke’s team, in competing at the game’s elite level, saw them pull away to a flattering five-point victory.

Watched by an attendance of 6,124 in perfect weather conditions, Monaghan struggled for an hour against their Division Four opponents – opponents fuelled by wonderful home support which provided them with a ‘16th man’ element.

The visitors benefitted from the strength of their bench in the second half when Carlow, at times, looked poised to cause the biggest upset of this year’s football championship. The introduction of Conor McCarthy proved very fruitful while Ryan McAnespie chipped in with a point from play at a vital stage to put his side 0-10 to 1-6 ahead.

Carlow manager Turlough O’Brien was bitterly disappointed that the home county had not completed the job. He said: “We wanted to win the game – we don’t need moral victories. Any team that prepares properly can compete, instead of throwing in the towel before the championship begins.”

This game was all about Carlow, the David taking on a football Goliath. Turlough O’Brien’s men exceeded all expectations and put serious questions to the Ulster county, who were far from impressive overall.

In a frantic first half of only eight points, five to Monaghan, Carlow could easily have gone in ahead at the break had Seán Gannon’s close range shot not gone the wrong side of the post after the Éire Óg man had combined brilliantly with the influential Brendan Murphy in setting up the chance.

Monaghan were wasteful in attack in that opening half, kicking eight wides to which they added six after the change of ends. They were forced to shoot from long distance much of the time as Carlow defended in depth and while the forward line in general had left their shooting boots at home, midfielder Kieran Hughes was very much on form.

He was on the ball more than any other Monaghan player and shot three fine, and crucial, points from play. There will also be concern in the Monaghan camp at the concession of 21 frees.

There were flashes of the brilliance of their marquee forward Conor McManus, the Clontibret clubman scored 0-3, 0-2 from frees but was overshadowed by the brilliant free-taking of Carlow’s Paul Broderick, who hit 0-5 from frees, his first point of the second half from 55 metres close to the sideline an inspirational score.

Darren Hughes was black-carded in first half injury time, apparently for something he said to a linesman, and after a brace of Carlow points had levelled matters early in the second half, Shane Carey edged the visitors ahead with a point from play.

On 49 minutes the Carlow venue erupted when Gary Kelly, the home side’s left half back, availed of slack Monaghan defence in dealing with a 45 metre free, to crash home a great goal as Carlow led 1-5 to 0-6.

Monaghan’s Cathal McCarthy pointed before the impeccable Paul Broderick arrowed another Carlow free between the posts.

But as the pace of the game caught up with O’Brien’s men, Monaghan began to monopolise possession and points from McCarthy, Rory Beggan (free) and substitute Ryan McAnespie put them in front.

Then came Kelly’s goal made by the forceful run of Dermot Malone which pierced Carlow’s left flank of defence before his fisted effort across the face of the home goalmouth was bundled to the net by the inrushing Fintan Kelly.

A relieved Monaghan team boss Malachy O’Rourke admitted after the game: “We have a lot to work on.”

The Derrylin native added: “We knew we would get nothing soft here.”

The goal had given his side the impetus just at the right time. Monaghan, he said, would take whatever the draw threw up, stating: “We have two weeks to prepare for it.”