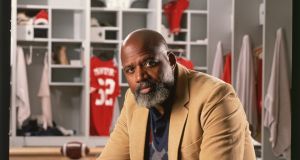 Harry Edwards: teaches sociology at the University of California at Berkeley. He also works to place minorities into the front offices of professional football teams. Photograph: by Roger Ressmeyer/Corbis/VCG via Getty Images 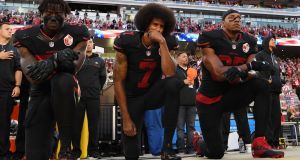 Colin Kaepernick (centre): refused to stand for the national anthem in support of the Black Lives Matter protest – a move that has effectively stalled his career.

It’s common when writing about Dr Harry Edwards to use the word ‘towering,’ partly in reference to his status as scholar and activist at the frontier of sport, race and society but also because of his sheer size.

He arrived at this year’s GAA Museum Summer School, themed ‘Sport and Politics’ not just an expert or an authority on the subject but its embodiment. At 6ft 8in, he stepped onto the podium calming the anxieties of those who were wondering would he actually fit beneath the low ceiling. Just about.

He was the main event for the summer school, in its second year. For more than 50 years, as a sportsman, an academic and above all an activist he has brought his forensic intellect to bear on a range of issues that we nowadays take for granted.

The strength of his analysis has helped him in many cases become almost a prophet, calling trends in sport based off social research. Yet when he was ready to work on his PhD thesis, he had his work cut out even to persuade Cornell University of its academic merits, as he recalled three years ago.

By then he was already well known, as a prominent member of the Black Panthers party and the inspiration behind the Olympic Project for Human Rights (OPHR), which targeted the Mexico games of 1968 originally with the threat of boycott in support of a list of demands aimed at simply bringing to an end overt racism in sport – for instance ending the participation of South Africa and Rhodesia and ensuring greater black participation within US athletics.

Methods were revised when the idea of a boycott was dropped and led to one of the great protests of the 20th century, the Black Power salute of Tommie Smith and John Carlos at the medal ceremony for the 200 metres.

Edwards is proud of the fact that the picture of the athletes’ protest – gloved hands extended into the air – was chosen as the most iconic sports image of the 20th century.

He also says that the success of the protest led to Nelson Mandela coming to appreciate the power of the sports boycott.

His address in Croke Park is prefaced by a tribute he recorded to the memory of his friend the late Irish-American Bill Walsh, legendary coach of the San Francisco 49ers, who appointed Edwards as a consultant on race in recognition of the growing impact of black footballers and to help give expression to his desire to encourage a greater involvement of black coaches in the game.

In a roundabout way this all led to his arrival in Dublin.

Asked what persuaded him to accept the GAA’s invitation he cited a number of current and historical factors, most recently the Colin Kaepernick protest when the 49ers quarterback refused to stand for the national anthem in support of the Black Lives Matter protest – a move that has effectively stalled his career.

“You know I was contacted to come and speak about politics and sport,” says Edwards, “and I felt it was particularly auspicious because Time magazine had named Colin Kaepernick one of the 100 most influential people in the world. The statement he is making is germane to the American political scene, including the current state of circumstances involving a president who has a tin ear in terms of these kinds of issues.

“Then the other thing is that the 50th anniversary of the Olympic Project for Human Rights is coming up [the 50th anniversary edition of his ground breaking The Revolt of the Black Athlete has also been published] and there are organisations in London and South Africa, in Mexico who are inviting myself, John Carlos, Tommie Smith and others to come over and talk about that seminal moment that in many ways changed people’s perception of sport and the interface of sport with society.”

Edwards has some awareness that the GAA is probably the sports organisation with the greatest historical entanglement in politics anywhere in the world.

“I knew about the situation in 1920 with Bloody Sunday and the fact that they snatched out 14 people as a kind of revenge killing. I’m very much aware of the civil war that took place here. Bill Walsh used to talk about it from time to time and I used to wonder why he was so angry about it.

“Then I go back and see why: he’s not talking about, you know, 1865 and a civil war and slavery; he’s talking about the 1920s so I as a consequence of my relationship with Bill Walsh, became aware the political involvement of sport in the whole struggle here and of course that was also the thing that he had asked me on several occasions to come to Ireland with him when he played games in London and I just didn’t want to get on a small plane but now I wish I had so that was another factor. But I was aware of the of the political dimensions of and the fact that there had been a price paid in blood associated with sport.”

By looking at social trends he predicted in the early 1980s the rise of drugs in American football, a sport that black Americans have come to dominate. He believes that current policy battlegrounds will impact on sport. Medical cover and access to abortion, for instance, have the power to limit the involvement of women athletes from poorer backgrounds.

His categorisation of the waves of black athletes’ political protest throughout history is brought up to date by Kaepernick and Black Lives Matter, originally a hash-tag intended to highlight the killing of innocent blacks by police in the US. He is (appropriately) academic on the question of whether there has been improvement in the lot of black athletes over the decades.

“It’s an uneven thing. This is what I was saying earlier when I said progress depends on who’s keeping the books; it’s like profit. We gained access to Major League Baseball but the Negro Leagues collapsed and then when they shifted the transactional interest and began to develop these academies in places like Puerto Rico, it was cheaper.

His life’s work – he is, astonishingly, 75 – has in a way been dedicated to battling among other things, defeatism and pessimism.

“I’m very optimistic,” he says. “I think we still have the opportunity to become that more perfect society. I think that that’s what this struggle is about as I’ve stated about Colin Kaepernick.