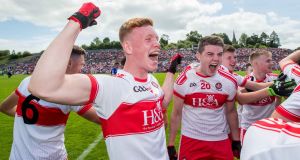 Derry produced a high quality display of finishing, but will want to work on their defending ahead of an All-Ireland quarter-final next month.

They needed a late scrambled goal from Ben McCarron to kill off the stubborn challenge of a Cavan side that often looked spent, but kept coming back for more.

Derry raced into a four point lead through Patrick Quigg, Lorcan McWilliams, Conleth McShane and Oisin McWilliams, but Cavan hit the net with their first attack, when Cian Madden sent midfielder James Smith in to rifle his shot past Oran Hartin.

Cian Madden brought Cavan level, but Derry were able to exploit space in the Cavan defence to pick off scores almost at will.

Ben McCarron and the hard-working Declan Cassidy hit two each as Derry opened out a six-point lead by the 18th minute.

Cavan lost star man Smith to a black card after 23 minutes, and the influence of Padraig McGrogan and Oisin McWilliams increased thereafter.

However, they could only add two converted frees from Lorcan McWilliams, while Cavan finished the first half strongly, with Philip Rogers and Tiernan Reilly adding scores.

Oisin Pierson’s two points kept the pressure on, and when Rogers punched home a 41st minute goal, they were still very much in the hunt.

Derry, with skipper Padraig McGrogan driving their challenge from a deep-lying midfield role, responded again, with Quigg and Lorcan McWilliams guiding over points.

And in the 52nd minute they grabbed a vital goal that gave them breathing space. After a scramble in the Cavan goalmouth McCarron got the slightest of touches that forced the ball over the line.

There was no way back for Cavan, and Derry completed the job with late scores from substitutes Alex Doherty and Fergal Mortimer.

Dynamo Brest sell fans a dummy as Belarusian league forges on 13:03
Barcelona in crisis as six board members resign in protest 12:44
Cycling: Junior Tour of Ireland is cancelled 12:05
GAA to hold remote special congress to help decide fate of 2020 Championship 09:22
Andy Murray to swap his tennis racket for a games controller 08:59
Crossword Get access to over 6,000 interactive crosswords