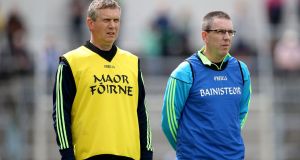 The Clare management have expressed their disappointment after footage emerged on social media of an individual in Clare tracksuits taking a bag of sliotars from behind the Cork goal before last Sunday’s Munster senior hurling final.

The man is believed to be a member of the Clare backroom team.

The Clare joint management team of Donal Moloney and Gerry O’Connor told Newstalk’s Off The Ball (via a statement); “they are extremely disappointed with what happened and it should never have happened.”

The individual was filmed taking the bag before throwing it into the Killinan End terrace at Semple Stadium.

According to reports on Tuesday morning, the Rebels are considering bringing an official complaint to the Munster Council in relation to the matter.

A longer version of the two videos which have been doing the rounds on social media, shows the man in question, dressed in Clare training gear and wearing a baseball cap, hovering with intent on the New Stand touchline.

A supporter in the stand has his camera phone trained on the man, who is seen drinking from a bottle of water before making his move.

He proceeds to make his way behind the Killinan End goal, patrolled by Cork goalkeeper Anthony Nash in the first half, before doubling back and picking up a red-coloured bag.

A second, shorter, video clearly shows the man taking the bag before he tosses it into the terrace and runs back to the New Stand side of the field.

It has also been reported this morning that Cork had to replace the sliotars that were meant for Nash’s use.

Munster Council officials are expected to launch an official investigation into the matter - and Clare may be asked to provide the identity of the man in question.

This appears a pre-meditated move as the people who took separate videos of the man from the New Stand and the Killinan End were aware of what was about to happen, and had their phones firmly focused on the man who took the bag of sliotars.

If Munster Council decide to proceed with an official charge, the individual could face a lengthy touchline ban, while Cork will also ask how he managed to get into a position where he could take the bag and then dispose of it.