Kildare and Mayo to be played in Croke Park not Newbridge 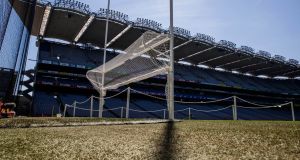 Kildare are not happy about their home fixture being moved to Croke Park. Photograph: Ryan Byrne/Inpho

Saturday’s round three football qualifiers between Kildare and Mayo, and Cavan and Tyrone will be played as a double header in Croke Park.

Despite Kildare being drawn out on Monday morning as the home team, the fixture has been moved to GAA HQ with the capacity in St Conleth’s Park, Newbridge just 9,020 (based on the most recent Slattery Report on venue capacities, however if the game is deemed all-ticket, that capacity is further reduced by 10 per cent). The match also clashes with the Irish Derby which is at the Curragh on Saturday evening.

The Leinster Leader are reporting that the decision will be challenged by Kildare GAA.

Cavan’s meeting with Tyrone will precede that encounter with the Breffni county having to concede their home advantage as works are ongoing at Breffni Park.

All four of the third round qualifiers will take place on Saturday afternoon. Clare, who edged Offaly on Sunday, take on Armagh at 3pm in the Athletic Grounds. While Monaghan will be heavy favourites against Leitrim in Carrick-on-Shannon.