Kerry look the part as championship moves up a gear 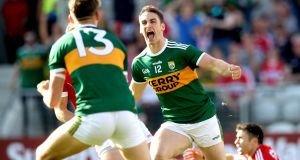 At times in the second half of this Munster final, as Kerry chipped the ball around among themselves trying to look interested, you could hear a low thrum coming from the Marquee pitched behind the city end of Páirc Uí Chaoimh. Jenny Greene and the RTÉ Concert Orchestra were knocking out floor-fillers off in the middle distance, lending a surreal atmosphere to it all.

The game had become such a non-event by then that the 27,764 crowd, long-since hushed by the lack of competition on the pitch, were no match for the bang of the bass in the next field over. Kerry were on shore leave in the evening sun and were doing as they pleased – they could easily have doubled their goal tally and ended up with 21 scores from 40 shots. A lamentable Cork side only managed 14 shots in the whole game. The orchestra would hardly have done much worse.

It all washed out as Kerry’s biggest win over Cork in 80 years, their sixth Munster title in a row and a ticket to a Super 8s opener against Galway in Croke Park three weeks from now. They did so with six starters playing in their first ever Munster final, the accelerated future demanded of Eamonn Fitzmaurice by the Kerry public made flesh. One of them, goalkeeper Shane Murphy, went up to collect the cup afterwards and couldn’t have got off the stage quicker if he’d taken a zipline down to his teammates on the pitch. Onwards.

For Fitzmaurice, this looks very much like the start of something, even though he’s midway through his sixth year in the gig. After a few seasons when his Kerry teams were often leaden in Croke Park, this one pulses like a live cable. They were so much faster than Cork on Saturday night, noticeably fitter too.

On top of it all, they had a full-forward line of David Clifford, Paul Geaney and James O’Donoghue to polish everything off, finishing with 2-10 between them, 2-9 from play. It’s hard not to get excited for the music they and Dublin will make together over the coming seasons.

This one, with its new format, looks to have come along at the right time. Ordinarily, Kerry would have five weeks off now before a quarter-final in a deserted Croke Park. Instead, they can zero in on a bumper clash with Galway and get ready for three games in four weeks just to make an All-Ireland semi-final. Whether 2018 ends with Sam Maguire or not, Kerry’s young players will come out of it a couple of years further down the line than they would have before.

“From our point of view, 100 per cent this is what we want,” Fitzmaurice said. “It’s games and it’s the period certainly since I’ve taken over that we’ve found hardest to manage. There’s always been lots spoken about the period in between league and championship, we’ve never had any hassle with that. We just play a load of club football in Kerry and it suits us. But that period in July, the month of July, we’ve tried plenty of different things and we’ve always found it difficult. So playing games this summer certainly is very appealing.”

For Cork, this was a new low. A 17-point beating would have been far worse if they hadn’t bounced out to a rapid start, putting 2-1 on the board inside the opening 10 minutes. All it did was delay the point at which Kerry disappeared across the horizon.

The thing about snatching a couple of early goals against Kerry is that needs to be the start of the conversation rather than your whole argument. When Jamie O’Sullivan and Mark Collins ran a pair of identikit three-pointers to open their account, the game was afoot. When they only added a single point for the rest of the first half, the game was gone.

The goals weren’t even speedbumps to Kerry. Speedbumps are meant to slow you down. Kerry just shrugged their shoulders and ate Cork whole. They were behind for only three minutes after O’Sullivan’s goal, Stephen O’Brien skating in for a cracker of his own. And they trailed for another five after Collins got the second, with O’Donoghue, Paul Murphy and Seán O’Shea righting the ship. In 420 minutes (plus stoppage time) of Cork games under Fitzmaurice, Kerry have only trailed for 35.

They led by 1-11 to 2-1 at half-time and once Geaney knocked any remaining notions out of Cork with his first goal at the start of the second half, all that was left was to keep an eye on the record books.

“Kerry play with freedom, they play with abandon, they can get a run on you,” said Ronan McCarthy afterwards. “They’re ruthless to the end. To me, they’re the same as any Kerry team I ever played against, in that they have quality up front and if they’re allowed to play, they’re going to hurt you.”

They were and they did and look what happened.