Kevin McStay: How stiff will Mayo test be for omnipotent Dublin? 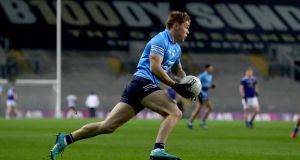 It has always been true that fairytales wither on the vine when it comes to the last four. Croke Park is just a different place and it doesn’t have much of a tradition for entertaining great romantic stories at the All-Ireland semi-final stage.

It is a different field with different surroundings and a different history. It is funny. You spend your whole life hoping to get there. And then, when you do, you can find it to be a cold, uncaring, merciless kind of place.

Sunday’s game was a stark illustration of that.

Tipperary had those five opening minutes when they might have felt something wondrous was about to unfold but then Mayo shut out that light. Tommy Conroy made a great steal on the ball, worked a one two with Aidan O’Shea and had the vision to lift the head and spy Cillian O’Connor loitering on the back post. It was a terrific full forward line goal. And a sense of inevitability descended on Croke Park then and there. Mayo settled. They looked and played like they belonged there.

The pace of playing lower division league football caught up with Cavan and Tipperary this weekend. The belief that you can get away with untidiness was exposed. Everything is tested - your athleticism, your vision, your two-handedness and two-footedness, your decision-making. And if you are not used to the speed of these games in Croke Park, you can be left floundering very quickly.

Essentially you get exposed. It is not nice. It is brutal, in fact. The final score margins told a tale. Dublin finished 15 to the good and they were coasting. Mayo were +16 at half-time and plus +20 for a while in the second-half. These score lines look bad at the All-Ireland semi-final stage. But when you drill it down, it is a familiar story.

Only the strongest teams make it to the final. Look at the last 10 finals. Just five counties have made it to the big day. Dublin, Kerry, Mayo, Tyrone and Donegal. Just five counties in a decade! So Tipp and Cavan reaching the final is a romantic idea. But it’s not a romantic reality. Kildare 1998. Armagh 1977. There are very few times when new counties make that breakthrough.

Dublin’s omnipotence looms over this campaign but let’s for a moment look at their semi-final on its merits.

It was anticipated that Cavan would bring immense hunger and bloody minded resilience, qualities that guided them through Ulster. And those are good traits but can only take you so far.

In Croke Park, it comes down to execution and skill set. Dublin and Mayo were expected - no, obliged - to win. And Dublin did that by simply never giving Cavan even a scent of hope. They were three ahead at the first water break.

Then +six, +nine and finally +15. They just steadily put out the lights. And Cavan probably got as much out of themselves as they could. They were up against champion opposition. Just look at the scores from turnovers in both games. Cavan gave away six points in turnovers in the first-half.

Because this is not a once-in-a-generation Dublin team

Mayo had 3-6 from turnovers against Tipperary also in the first-half. That comes down to the opposition being better at tackling and swarming. Dublin didn’t give Cavan a single real goal chance. The high ball into Thomas Galligan was just expertly deconstructed. In fact, I think Dublin haven’t really given away any proper goal chance all winter. It is a very difficult defensive rear guard to break down. They are, obviously, a force like we have never seen.

And the game got me thinking. What if it had been played outside Croke Park? Maybe the Athletics Grounds or somewhere that Cavan are more comfortable. Well, Dublin would have won. But it would have been a tighter game. And that needs to happen - immediately.

Because this is not a once-in-a-generation Dublin team. That illusion has been shattered. From 2011 there were only three starters on Saturday evening and from the 2015 All-Ireland final team, only six starters remain. That gives you a sense of how this ‘team’ has evolved in personnel.

The counter argument is: ‘but look at how close the All-Ireland finals have been’. Well, yes, the gap narrows. The big argument is that their winning average in those seven finals is 2.1 points. So what’s the problem?

But that is not the point. Because it is the final: you expect to have the two best teams in Ireland involved. And in truth Mayo and Kerry have saved the GAA’s bacon by making those finals close.

It is impossible to see past continuing domination by Dublin. The Under-20s play their final as a curtain raiser to the senior game. A glimpse of the next generation.

It won’t stop, I am convinced but if we at least stage the quarter-finals and semi-finals involving Dublin in venues around the country, then you will take the unbroken domination out of it. Monaghan in Clones. Kerry in Killarney. Those ties would break the cycle. Otherwise the only sell out game in Croke Park will be the All-Ireland final.

And if finance gets hit then at central level it will become a major problem. I’m not convinced it is seen as a crisis yet. I can’t think of one central intervention over the past three years.

Here are things they could change immediately: The Championship format. The fact that there are only a handful of chief executives appointed to county boards. Why can’t the GAA appoint 32 chief executives - and pay them? Mileage, accommodation and food should be paid from central source because they are the significant drain on county boards’ annual squad budget.

In Roscommon, for instance, players would leave at 4.30pm from various locations around Ireland to train in Kiltoom and get home again at midnight. 26 out of our panel of 34 were not based in Roscommon. So you can imagine how much of the budget is going on that. And these three expenses Dublin do not have. The venues, the payment, the competition format and the chief executives are something the GAA could change straight away.

And that is essentially what Dublin did. They became rigorously organised and efficient

I haven’t heard John Horan articulate any concern as of yet. What if Mayo can’t stay within 10 points of Dublin in the senior final? It could easily happen, with all due respect to my own county.

Dublin have always had a significant advantage in terms of population. Years ago, Munster rugby used to worry what would happen if Leinster got organised because of the private school feeder system and the population. And, of course, they did. And that is essentially what Dublin did. They became rigorously organised and efficient.

My sense is that the Dublin position on this debate is: money is not the game changer. They ask, not unreasonably: what about Kerry’s domination? What about Kilkenny?

Well, to begin with neither county got almost €18 million in games development and coaching grants over an 11-year period. And as we have outlined, this is not one generation of players. It was in Kerry and Kilkenny.

Dublin GAA people regard this debate as demeaning to their team. To me, it is not about this team - or the earlier All-Ireland winning teams. I couldn’t be happier for them because I love the way they play the game of Gaelic football. I know what this debate is not about, and that’s the guys who play football for Dublin.

It’s about Dublin as an entity. And I feel a debate, led by GAA management, has to commence immediately. There has to be an acceptance that there is a problem and that it will require out of the box thinking to resolve it. Or else it will not be resolved.

There will be a lot of column inches and podcasts devoted to this over the coming weeks. A lot of positions are entrenched. This all originated in a GAA sponsored effort to ‘fix’ the Dublin situation. Well, now they have fixed Dublin but the competition is broken.

Fortunately, Mayo-Dublin finals have been so riveting, they have glossed over so much of what went before. Time after time Mayo have stepped forward to make the All-Ireland final days unforgettable. They might do the same again. But can they come out the right side of this one? They coughed up 10 goal chances against Tipp and there is work to be done.

This will be the biggest test Dublin face. But how strenuous will it be? Mayo’s defence does not look as mean as it did three years ago. Their midfield is more mobile but not necessarily more influential. Dessie Farrell merely wants to tweak his team.

I believe James Horan has more to do to eliminate the openness of that middle channel. They must resolve the fact that an average Tipp team went down the middle 10 times and scored three goals against them .They need to put a system in place to prevent that happening against Dublin. They have to decide on four key match ups - Brian Fenton, Ciaran Kilkenny, Con O’Callaghan and Dean Rock. And they need more of an impact from their bench.

All of that is achievable. And if they do that, then they may give Croke Park its only real football game of the season.