How Tipperary football finally won its own war of independence 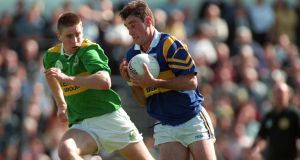 A few minutes after Tipperary had fallen to All-Ireland champions Kerry in the Munster final of 1998, their captain Brian Bourke summed up the feeling in the dressing room. It had been a terse game on the muggy Sunday of the August bank holiday, with Tipp trailing by just a point at half-time by executing a game plan revolving around the sensational teenager talent Declan Browne and doing enough to make the Kerry men uncomfortable until the end. They finished four points short.

“They seem to be our bogey team,” Bourke admitted glumly of Kerry. “We just can’t get by them. I know they are saying nice things about us and how well we played but that is little consolation to us because we want to be winners.”

Derry Foley played midfield that afternoon, marking Darragh Ó Sé. By then, Foley was a veteran of Tipp’s nearly-decade. He had gone to the High Court to successfully appeal a red card that would have prevented him from lining out in Tipp’s 1993 Munster final against Cork and soon established himself as a classy, athletic midfielder in the high-fetching tradition. Over the past few weeks, he has had time to think about the chief difference between Tipperary then and Tipperary now.

“I lost three Munster finals in the 1990s- 1993, 1994 and 1998. On no occasion did we believe as a team we would win. That is the biggest change I have seen in Tipperary football over the last decade and a half. These players all believe they are good enough. They are no longer in awe of Cork or Kerry or Mayo. They see themselves on an equal footing and it is to be admired what has been done at grassroots level. I firmly believe that if the team I played on had that self-belief then it might have been bridged earlier.”

Tipperary’s progression to this stage of this unique All-Ireland winter is at once fabulous and the culmination of many years of foresight and planning.

“It was always a dream could they win a Munster championship this year- the likes of Joe Hannigan and the current chairman of the football board, Barry O’Brien, would have spoken about it,” says Pat Moroney.

The Aherlow man has, since the mid-1960s, worn every conceivable cap associated with Tipperary football. He coordinated underage development teams with David Power until 2015 and knows many of the players involved on Sunday. The 100 year centenary of Bloody Sunday adds to the poignancy of Tipp’s emergence as Munster champions for the first time since 1935.

“About 10 years ago there was talk that the 100th anniversary or our last All-Ireland win should be celebrated with another and that it was up to the youngsters, to try and achieve it. That was the mantra. Barry O’Brien took it on when he was county chairman and he made it almost a policy that the football team should try and achieve that. And it is interesting that they are a game away from that now. “

A few days after the euphoria of the Munster final win, Browne, probably the most brilliant individual football talent that county has produced, admitted that he shed tears. Browne was an All-Star at the age of 18 but because Tipp were trapped in Munster, he had to wait until 2003, when he was 24, before he finally got to play a game in Croke Park. He scored 0-9 in a qualifying game against Donegal and although Tipperary had been beaten by 10 points, all Brian McEniff wanted to talk about was how much of a pleasure it had been to watch Browne play.

He finished the year with a second All-Star and an emblem of the locked talent within the county. It could have been different: Browne was sufficiently skilled at hurling to play underage for Tipp and was encouraged by Nicky English to make a push for the senior squad before their All-Ireland winning season in 2001. But he just couldn’t make that break from football.

“There is a small cohort of very passionate football people down here to such an extent whether the hurlers win or lose, we are almost indifferent,” says Foley. “We like to see them win but it isn’t a life or death scenario. We have the same passion for Tipperary football as a Kerry person has for Kerry football.”

“Tipp is big enough for both games to flourish and maybe we are beginning to see that now,” says Moroney. “You could flip the Tipperary story in an awful lot of counties where more effort should be made to make sure youngsters have a chance to play hurling.”

Moroney has no doubt that all of Tipp will be burning for the footballers to take what would have seemed like an unfathomable step at the beginning of October. The Gods have aligned in strange ways, not least in the composition of the four semi-final teams mirroring the 1920 set 100 years after the GAA’s grimmest occasion.

This has been the brightest 10 years for Tipp football in living memory, from the 2011 All-Ireland minor title to their qualifier run, under Liam Kearns to the All-Ireland semi-final appearance against Mayo four years ago. Sunday’s rematch feels different because Tipperary will land up as champions. But even the more ardent of Tipp fans consider this a moment of serendipity as well.

“This is a once off,” says Foley. “Don’t believe for one second that this Tipp team will be back to contest another All-Ireland title next year. Everything has fallen into place for this team. In a normal year, Michael Quinlivan would be in southeast Asia, Liam Casey would be somewhere in the world on his travels and Colin Riordan would be coming home from Australia to visit his family for Christmas.

“To have three players of that magnitude suddenly available at the same time is huge. So I don’t think this means we will be there year in and year out. But they are a very good team and are there on merit. And we are hoping we can win because I think we have a legitimate chance.”