Kevin McStay: Dublin to win but it will be closer than you think 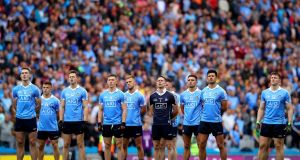 Possibly Dublin’s least-praised skill over the years has been their ability to find a way when matches are close, to keep their focus in tight finishes and get the job done. Photograph: Ryan Byrne/Inpho

There is no doubt Dublin are the best team we have seen in the 2018 championship by a fair distance. But I don’t believe it follows that they will win this final by a margin that will reflect that distance.

This idea that seems to be around that it’s theirs to lose is way too simplistic, in my view. I do expect them to win but it will be a lot closer than people think.

When the field narrows all the way down after a rigorous championship, there doesn’t tend to be very much between the two teams that are left standing. While it’s true that Dublin won’t have been too sad to see Kerry and Mayo fall away, it’s still a fact that Tyrone are the team who have got closest to them this summer. I certainly don’t see Tyrone being as far off them as the bookmakers say.

That said, it’s obvious that Dublin are capable of going to a level above what Tyrone can muster. The Dublin attack is frightening when it gets going. It’s based on quick movement, quick passing and a strong base in midfield.

I can see Michael Darragh Macauley being an X-factor here because his unpredictability can throw an organised, well-drilled defence out of sync. If he’s not always sure what he’s going to do himself, it’s hard for Tyrone to know either.

The key to Dublin’s attack is this constant, selfless rotation of the ball. The cumulative effect of it is not just that you avoid the usual leakage that comes from one or two players deciding that they’re going to be the star of the show. More crucially, it means that by shifting the opposition defence over and back at high speed and from wide angles, your final pass invariably sets up a shooting opportunity in the central channel, very often with no opposition.

If you pass quick enough, it’s just human nature that the defender’s eye follows the ball eventually. That’s how in even the most packed defence, somebody ends up getting lost or unaccounted for. It only take a split second of a lapse and next thing you know, a Dublin player is in front of the posts taking what looks like a handy point. The finish is simple because everything that has led up to it has been designed to make it so.

That’s a real challenge for Tyrone. Can they establish pressure, first and foremost? You would have to imagine they can, at least in the opening stages. Can they be aggressive? No better men.

Can they hit Dublin, legitimately or otherwise and stay on the right side of the law? Can they block, can they track runners? Yes, yes and yes. But can they do all that for almost 80 minutes with full concentration and application? That’s the test.

Every Dublin score has to be an inquest for Tyrone. What happened? How do we stop it happening again? How do we stop them getting that rhythm going? Fundamentally, you can’t allow Dublin to become a scoring machine in a final and then presume you will outscore them. That’s not a viable strategy. Tyrone need to stop this game opening up. They need Dublin to be going five minutes, seven minutes, 10 minutes without a score. Then they’re in the game.

I think far too much is being made of last year’s All-Ireland semi-final. In the modern game, when a match gets away from you, big gaps open up. With the best will in the world, you get to a point where you stop caring whether you lose by seven or 10 or 12 or 16. Con O’Callaghan’s goal broke Tyrone and the game got away from them too quickly. So I wouldn’t take it as a template for this game.

Funny enough, I think Tyrone may have more versatile players than Dublin. That offers Mickey Harte flexibility with his game plan. History would suggest t they are unlikely to move too far from their normal game, certainly in the first half or the first three quarters. But if and when they come out and try to have a go at Dublin, they won’t need to make a raft of changes in personnel to do it.

I don’t expect Tyrone to put everyone behind the ball and force a kind of a Mexican stand-off. For one thing, Harte doesn’t tend to die wondering in finals. For another, the lesson of the game in Omagh is surely that when Tyrone came out of their shell in the closing quarter-hour, when they pushed up and got the bit between their teeth and committed men forward, that’s when they had Dublin ever so slightly on the run.

But trust me, playing with that mentality is so difficult against Dublin. You are so, so wary of leaving yourself open, especially early in the game. You have to give yourself a chance to be in the game when it is decided in the last 15 minutes.

So I think we’re looking at a cagey, strategic game that will come down to who can exert control over the final quarter. The benches will play a huge part, as they have done in the past few finals. Tyrone’s offering isn’t insignificant here but Dublin’s is exceptional, with proven game-changers who have been the difference before and can be again.

It would be wrong to dismiss Tyrone’s chances. I do think they can win it. But possibly Dublin’s least-praised skill over the years has been their ability to find a way when matches are close, to keep their focus in tight finishes and get the job done.

I expect them to get it done again here with a point or two to spare.