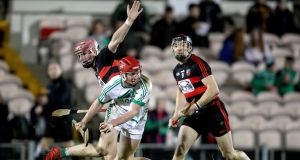 Henry Shefflin’s first season as manager is going to involve an All-Ireland final after he guided his native Ballyhale Shamrocks into a showdown next month with St Thomas from Galway.

Shefflin’s men came good in the second-half of this contest at Semple Stadium in Thurles in front of a crowd of 3,944 to book a date in the final on St Patrick’s Day.

The Kilkenny champions, the most prolific winners of the All-Ireland club title with six titles, never led during a dour opening half where the accuracy of Pauric Mahony helped Ballygunner lead by 0-8 to 0-7 at the break.

The Waterford and Munster kingpins, hoping to reach their first ever final, were far too dependent on Mahony and only managed three points from play over the hour.

In contrast, Ballyhale showed all the signs of a team prepared by Shefflin as they picked off 1-12 from play without being dependent on established county players like Michael Fennelly, TJ Reid and Colin Fennelly.

It was teenager Eoin Cody who made the biggest mark with the Leaving Cert student hitting 1-4 from play and with Joey Holdsen outstanding at full-back, Ballyhale never looked like relinquishing the lead which they got with Cody’s 44th minute strike.

Brian O’Sullivan managed a couple of points from play for Ballygunner and Peter Hogan also got one, but they lacked firepower when it mattered most.

In contrast, Ballyhale got stronger in attack as the game progressed and with Patrick Mullen landing a couple of efforts from out the field and with his brother Adrian, Eoin Reid and Cody also hitting the target, Ballyhale advanced to their eighth ever All-Ireland club title and the chance for Shefflin to crown his first year by leading them to glory.

1 Ken Early: PSG would be sensible final move for Ronaldo
2 Gerry Thornley: Consistent trailblazers New Zealand once again ahead of the posse
3 Rory McIlroy: Maybe I’m just not as good as I used to be
4 Would bonus point system have affected last five Six Nations?
5 The game they loved so well: How cricket united Hume, McGuinness and McCann
Real news has value SUBSCRIBE