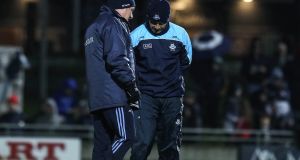 It takes a lot to test the nerve of Jim Gavin. Nothing whatsoever about the manner of Dublin’s brilliantly narrow one-point defeat to Kerry in Tralee on Saturday appeared to do so, only parts of the aftermath did - even if only in his still inscrutable way.

Not the part where players from both Dublin and Kerry began pushing and shoving each other in an after-match consultation, Gavin seen to be walking right by it, only not, it seemed, paying any interest or attention. These things often do appear worse than they are, but that doesn’t mean they didn’t happen.

“No, no, I was just interested in getting out of the cold,” Gavin said, determined to leave it at that.

When asked to comment on the continuing conversation around Diarmuid Connolly’s possible to return to the Dublin team, and reports on Friday that selector Jason Sherlock was no longer part of his backroom team, Gavin did get a little more animated: not losing his nerve, although clearly a nerve had been touched somewhere.

Because Sherlock, Gavin insisted, had “not in the least, not in the slightest” ever been gone from the Dublin set-up, the 1995 All-Ireland winner arriving in Tralee on Saturday night with the rest of the team, and promptly orchestrating part of the team warm-up, as is his remit.

“Why journalists, or how they report on conjecture and rumour, that’s your profession, not mine, so I can’t comment on that,” said Gavin, before adding that at no point was Sherlock gone from the backroom team. “Not in the least, not in the slightest.”

A British-based tabloid had run the story on Friday morning, stating that Sherlock was no longer part of the management, only without official confirmation from anyone within the Dublin set-up (Sherlock hadn’t been involved for Dublin’s opening two league fixtures, the defeat away to Monaghan, and last weelend’s Croke Park victory over Galway). Gavin at least put that one to bed.

On Connolly’s potential return, almost a year on since he last featured on the Dublin panel in the 2018 league, Gavin was typically coy: in this case, there were reports Connolly had featured with St Vincent’s in a club challenge game against Ballyboden St Enda’s earlier on Saturday, and rumour too he was training under Dublin strength and conditioning coach and 2011 All-Ireland winning captain Bryan Cullen.

“Well I can confirm that that’s certainly not the case, absolutely not,” Gavin said of the Connolly-Cullen connection, before adding: “If any player wants to volunteer their time for intercounty football, we’ll always look at them. The door has always remained open to any player who has either been with us in the past, or who wants to join us, and isn’t in the squad yet, And I think you saw a few players here putting their hand up for a jersey, and we’ll continue to look at the Sigerson Cup and the club games over next few weeks.”

As for the manner of Dublin’s close defeat, their second out of three league games to date, Gavin was in no worried or indeed unnerved.

“A great game, first and foremost,” he said. “Two teams really going hard at it for this time of the season. Disappointed, of course, not to come away with the points, but finished really, really strong, and our trajectory is a lot different, Kerry have a lot of work done, fitness levels would be very different, but overall the desire and drive of the Dublin players was great to see. We faced challenges like this before and responded, and I’m sure we’ll do so again.”

He wasn’t so impressed, however, at losing defender Mick Fiztsimons to a second yellow card, on 63 minutes: “It probably wasn’t even a free (his first card), and that had a big impact, to be down to 14 men. The (extra) man gave them the overlap, so to still finish was great to see.

“But it is what it is. We’re four weeks back, players go back to their clubs now for a week, and then it’s Mayo the following week. To be four weeks back, a game like that, so early in the season, will bring us on a ton, to be honest. It’s another step on our journey, and where we’re going for the championship. That’s always been our strategy, to take each game in isolation.”

1 The game they loved so well: How cricket united Hume, McGuinness and McCann
2 Brooks Koepka out to win Majors, not make friends
3 Brain as well as brawn on Sexton’s lockdown menu
4 Andy Farrell admits Ireland net may need to be spread wide in the autumn
5 Bryson DeChambeau’s driver snaps on seventh tee at US PGA
Real news has value SUBSCRIBE