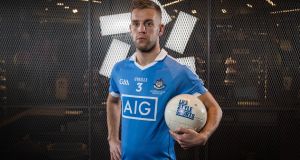 Jonny Cooper: “There seems to be a good bit of expectation amongst themselves, Kildare GAA, and the team, and they’ve a manager, a coach, who’s put a lot into them.”

Jonny Cooper is talking about trying and failing and trying again and failing better and making it sound a bit like his Samuel Beckett moment.

“My stance leg, was very diagonal, when I was planting my two feet, which I wouldn’t do now. I’d be a lot more square, and solid in my base...

“And I just slipped. I remember it very vividly, watched it a good few times. I remember, at the time thinking, I was at fault for it, then going straight into the next play. And that was a good lesson for me, in going from play to play. That’s very important. It was my mistake, and we conceded a goal, I think, because of me...”

Cooper is recalling this moment not because he wants to but because he can. The 2013 Leinster football semi-final against Kildare, only his second championship start for Dublin, the game just six minutes old when he slips and allows Paddy Brophy clean through for a Kildare goal.

“Yeah, I learned a lot of from it, and I’ve learnt a lot from a lot of things since then. But I remember quite vividly I went straight to the other side of the pitch for my kick out, a poor kick out off Stephen at the time, so it was good to get that experience, dropping one thing, no matter what happens, and going into the next thing. It was a good lesson in that regard.

“Obviously there’s a lot more to his [Brophy’s] game than beating me by [my] slipping, and if I was, or he was, to play the next day I’ve no doubt we wouldn’t be too far away, so looking forward to maybe having a good cut off him again on Sunday.”

Which indeed Cooper likely will. Brophy only returned to the Kildare panel prior the championship, having spent the last two-and-a-half years played Australian Rules football with West Coast Eagles, the Perth-based club.

Dublin are looking to win a record seventh Leinster title, and even accounting for some of the hype around Kildare, he does have reason to believe it will be closer contest than most imagine.

“I think so. There seems to be a good bit of expectation amongst themselves, Kildare GAA, and the team, and they’ve a manager, a coach, who’s put a lot into them, a lot of good individuals.

“Particularly from my point of view, looking at their offence, some are very dangerous, I’ve marked a couple of them, and newer guys coming into form as well. So looking forward to it, a very good offence, from the platform in the middle, right up, to threats in lot of places.”

Cooper missed most of Dublin’s league campaign with an ankle injury, but was promptly restored to the full back line for both the quarter-final against Carlow and the one-sided semi-final win over Westmeath.

Then Dublin as a whole appear to be pacing themselves a little differently this season, perhaps looking to peak no moment earlier than the third Sunday in September – presuming they get that far.

“I think getting up to that peak, maybe not peak but level of intensity, has been a little bit later this year. We always had a good bit in the legs, going into the National League, whereas this year we didn’t. And then it was about getting from game to game.

“We got to the final, and I think that was good enough territory, for us to get there, for what we had in our legs. But I think we came back after that very much refreshed, and that’s the way it’s been, pulling back a little and then striking when it’s most needed. I think we’re on course, with a good bit to go yet.”

1 Diego Maradona dies of heart attack, aged 60
2 Keith Duggan: Through the glories and the disgraces, we were all Maradona addicts
3 Handful of God: Five magic Maradona moments
4 Gordon D'Arcy: I know what Joe and Cheika would do. Fix the basics
5 Darragh Ó Sé: Cork and Donegal went out with the wrong attitude
Real news has value SUBSCRIBE