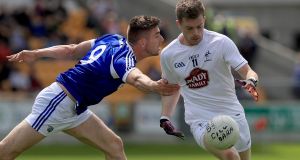 Niall Kelly eludes a challenge from Colm Begley of Laois: “We’re under no illusions about what Dublin can bring, what they will bring.” Photograph: Donal Farmer/Inpho

Take each game as it comes. Control the controllable. Worry about your own game and not the opposition.

Niall Kelly is being duly prosaic about Kildare’s first Leinster football final in eight years, until he’s politely reminded Dublin are the opposition.

The team that has won every game in the province by a double-figure margin since 2013; that has beaten Kildare by an aggregate score of 35 points in their last two meetings; going for a record seventh successive Leinster title.

And the team Kildare haven’t beaten in the championship since the turn of the last century – the 2000 Leinster final replay.

“Well, maybe that is in the back of the minds a bit,” admits Flynn, and who could blame him. “And going in, after the four-week break, you can tend to think about the match a lot, and delve into things a bit more than you should, like.

“But it’s not something we can really dwell on at all. Naturally enough you do look ahead to what might be coming down the line, but something that Cian O’Neill [the Kildare manager] would have driven into us all year is to focus on the next game. We’ve been doing it throughout the league and it’s been kind of the same thing in the championship.”

Kelly has reason to be humbly optimistic. At 23, he’s of the new generation of Kildare footballers, who have beaten Dublin on occasion coming up through the minor and under-21 ranks.

Sunday’s final in Croke Park will also mark his first championship start against Dublin, although he did appear as a sub in the 2015 Leinster final, scoring a late point (Dublin won that game 5-18 to 0-14).

He’s also been in brilliant form this season, the axis to Kildare’s attacking game along with Daniel Flynn; their nine-point semi-final win over Meath, coupled with promotion back to Division One, has also added layers to their confidence.

“Before the Meath game, I don’t think anybody was looking ahead to the Leinster final, because we hadn’t got by that stage in eight years. It’s just important for us to keep our feet on the ground, but at the same time it’s massive for everyone here and really would mean the world to Kildare. It’s up to us to put in a massive shift.

“We’re under no illusions about what Dublin can bring, what they will bring. We know their performance is going to be up to a level that we haven’t faced this year, and probably in the last few years.

“We have full confidence in Cian and the lads to have us in a place that we’re ready mentally and physically to deal with what they’re going to bring. We don’t think it’s a foregone conclusion by any means. People outside the group may feel us losing by a few points would be a good result, but to us we may never get back to a Leinster final again. Who knows, it could be another eight years before we get back, and a lot of our team would be gone.”

The county’s own rising expectation is doused in reality too – particularly after watching Dublin beat Westmeath in their semi-final by 31 points. Kelly only watched “bits” of the game, but again reckons the Leinster final has to be taken on Kildare’s merits firstly.

“And I think the Westmeath game was a wake-up call. We had a week after the Meath game where we were happy with our performance for the most part, and then the Dublin game [against Westmeath] brought us right back down to earth again. The Meath performance won’t be enough on the day against Dublin.

“They were very impressive, as all of us would have seen. About the fear factor, there probably is a reassurance that we have previously beaten them at minor and under-21. It will help a little bit in lads’ minds and our panel would be the core of those teams. It’s nice to know that those Dublin lads aren’t untouchable altogether.

“It’s different at senior, and we haven’t been there yet, as they have been over the last few months and years. We’ve a lot of work to do to get up to their level. It’s going to be a massive test so we’re under no illusions about what they’re going to bring and it’s up to us to match it and try and better it.

“At the same time, in any championship game, you feel you’re in a good place, but it’s not until you get there and perform on the day that you really know where you’re at.”