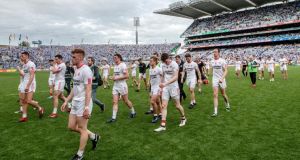 Dejected Tyrone players leave the field at Croke Park. None of the qualities we took for granted with them were evident on Sunday. Photograph: James Crombie/Inpho

Sunday’s All-Ireland semi-final completed Dublin’s transformation from a kicking team into a possession-based team. The metamorphosis over their three years of All-Ireland domination has been incredible.

The original swashbuckling, all-attacking side of 2013 and ’14 has been replaced by a highly disciplined and really deliberate team. They were very, very good here and succeeded in completely deflating Tyrone’s game plan by never allowing the game to become a physical battle. The key to that was contact: it was non-existent on Sunday in a way you simply don’t associate with Tyrone teams.

Yet again, Stephen Cluxton gave Dublin a really strong platform to attack. Tyrone decided they were going to try to shut him down and it just didn’t work. They got no joy and Cluxton was able to kick over the top of their press and give his team the platform to go at the Tyrone defence before they were set up properly.

They also pushed up on the Tyrone kick-out with four players in the full-forward line, which they also did in the quarter-final. They got so much right tactically. It was clear they were schooled to keep the ball and create situations where they sucked Tyrone out of their defensive structure.

And to my mind, the Tyrone players looked as if they all were given an area of the pitch to mark and to be robust once a Dublin ball-carrier came into that area. But that didn’t happen because the Dublin players didn’t go into those areas and kept waiting for a moment where they could make an incision and attack.

And also, from a defensive perspective, Dublin completely shut Tyrone’s key players down. They were both man-marking and also zonally marking. They didn’t give key players such as Peter Harte and Tiernan McCann an inch and then the other guys got swallowed up in the system. Tyrone’s ball-carriers got isolated and were then turned over too often and too easily.

Not only that, they gave Tyrone a taste of their own medicine in the way they set up. There was reverse psychology at work here. They knew Tyrone wanted to force Dublin to play through them. And they thought, why don’t we do that? Dublin were disciplined and the tactics were implemented to the nth degree. Sometimes they had 15 behind the ball. They did to Tyrone what Tyrone have been doing to others.

And finally, the players coming in off the bench was an ominous sign. It’s a young team now with a seasoned bench. The young generation has taken over from a group that has been phenomenal. And the other thing that struck me is how often they hand-passed the ball. They were up nearly 300 hand-passes to 150 for Tyrone.

When a Leinster team plays an Ulster team, you’d expect those figures to be reversed. (And there was no booing from the Hill for the number of hand passes here. Instead, there were oles! How things have changed). Their decision making was excellent, their patience endless and they completely bossed the game in a way nobody could have predicted. The contest was all but over after five minutes. That’s the main consideration in not putting this down to a Dublin masterclass.

Impressive as Dublin were, there is no glossing over the fact Tyrone were very, very poor. For me, they brought about 25 per cent of their capability to the occasion on Sunday. So you immediately have to ask: was the fault with the system or with the players?

Their difficulty started before the throw-in, when they opted to break away from the parade very early rather than march to the Hill end. That is a provocation and it can be a smart thing to do if you are convinced you will back it up with intensity and hits and turnovers. You are saying – we don’t care about the Hill. We don’t care about you. But you have to back it up.

And Tyrone were not able to do that. In a weird way, the game was a carbon copy of the Tyrone-Donegal game except that this time, Tyrone resembled Donegal. They had the defensive shape but absolutely no intensity or energy.

They didn’t pressure the ball. Tyrone couldn’t get a hand on the ball or any player and became demoralised really quickly. And then at the other end they couldn’t break the Dublin defence down. They failed to create any real threat inside. Dublin were allowed to do what they wanted with the ball. That’s a fatal mistake to make against Dublin. So this thing of getting huge numbers behind the ball has to be looked at in terms of it not equating to any impact on the game. The system is not doing what it is supposed to do. They were listless and looked like they had no self-belief.

Apart from Colm Cavanagh, there was no apparent desire or will to win and no fire. Why?

The conclusion we came to with Donegal after their collapse against Tyrone is that the younger lads wilted on what was for them a big occasion. I think the same happened here. It is nothing to do with fitness. They had cruised to this stage of the All-Ireland and looked well-placed to pose a serious threat to Dublin. But none of the qualities we took for granted were evident.

Where was the offensive transition? Where the runners off the shoulder? Where was the turnover? Darren McCurry put in a nasty tackle in the 64th minute. From the perspective of making it a battle, that was all they gave.

And that is ridiculous in an All-Ireland semi-final. I just feel they were beaten psychologically and when Con O’Callaghan hit them with the early goal, all the confidence just drained out of them. Dublin were clear about what they wanted to do but they probably couldn’t have banked on it being so successful so quickly.

Why does that happen and when does it happen? Is it in training in the lead up to the game or is it something that afflicts several players and then spreads through the team in the early stages of a game? I genuinely don’t know. It is a big question and it is so complex. But something knocked Tyrone off course.

It was unbelievable to see the time the Dublin players had on the ball, even inside the Tyrone 45. All summer, Tyrone have attacked anything that moves in there. On Sunday they allowed Dublin’s string-pullers like Ciarán Kilkenny, Jack McCaffrey and James McCarthy to do as they pleased in their own time. When you are marking the man with the ball, you have to do just that. You can’t merely mark the space in front of him. You have to force the Dublin decision makers out of their comfort zone. But Tyrone, individually and collectively, were unable to do that. That energy and aggression was missing.

And once that happens, it is very, very difficult for a manager to counteract. But I do feel that the zonal defensive pattern may have contributed to Tyrone’s downfall once it became apparent that they couldn’t bring their usual ferocity and hunger to the occasion.

Watching them made me think of the term “social loafing”. It happens in all walks of life;: responsibility is diluted among the group so that although there are problems, it becomes nobody’s fault. It felt like that was happening to the Tyrone collective in the first half when the Dublin forwards were seemingly cutting through them at will and picking off points. Everyone can tell themselves that it is somebody else’s fault.

So perhaps they would have been better served by man marking and taking key players on and putting a right and left sweeper in front of their full backs, with the others available to aggressively go on the offensive and play on the front foot; to be proactive rather than passive. In a zone, the responsibility is diluted because nobody is held accountable.

Tyrone simply never turned up. That is why this was a very good Dublin performance – but not a masterclass. Rather, it was a Tyrone disaster. Dublin didn’t even get a test. They must have been wondering where the challenge was.

That’s the disconcerting thing. They cruised through an All-Ireland semi-final against a team specifically designed to try and make life hard for them. Dublin are a great team. They are really well coached at the moment. They are a credit to everyone who put them in this position.

Where it leaves them is another matter. I am sure Jim Gavin will be just delighted to have made it back to the final after such an easy passage. It becomes a new challenge now. Mayo are hardened and won’t ask the same questions a defensive team asks. The won’t put 15 behind the ball and I don’t see Dublin putting 15 behind the ball in the final either because they will want a shoot-out against Mayo.

Mayo will go man to man but you will see half-backs and midfielders dropping back. They will step up and take the game to Dublin and will keep players up the field. In order to beat Dublin, you have to be able to take them on. You have to defend and attack and challenge their kick-out – if you are good enough. The rules of engagement change. But at least with Mayo we can be assured that there will be an engagement.