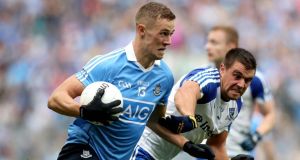 You could see Dublin’s intentions clearly in the first 30 seconds of Saturday’s quarter-final. Paul Mannion took a very good score off his left foot. He’s a very good player with pace, agility and confidence, which isn’t a great combination for any opposition corner back but what caught my eye was how quickly the ball was moved in the opening seconds.

There was no solo or hop needed. It was very clear that Dublin weren’t going to take the ball into contact – just move it first time, every time and don’t give a defensive team like Monaghan what they need, which is the opportunity to tackle and turn the ball over.

You could see their game plan immediately, including defensively. Monaghan kicked the ball in for their opening attack and Philly McMahon bats it down and Jonny Cooper sweeps it up. It was a three versus two situation for Dublin. As the game progressed Cian O’Sullivan also played that role, which he’s been doing for the past couple of campaigns.

It is clear that Dublin have refined a game plan based on what’s been going on in football over the past couple of years and taken it to a high level.

They have defenders who would probably be able to hold their own one-on-one against most forwards anyway but they also have the safety net of a tried and practised sweeper system operated by intelligent players like O’Sullivan and Cooper, who know where exactly they should be and have the ability to mark space.

The other interesting thing for me was the extent to which Dublin went zonal on the Monaghan kick-out. This isn’t a new tactic but Dublin decided to push four players into the full-forward line and three in the half-forward line. It forced Monaghan to go long but for me it didn’t work.

Four is a lot to push into the full-forward line and once or twice Rory Beggan clipped the ball over the four of them into that pocket between the 20 and 45 and Monaghan got out with the ball. That tactic got them out two or three times and that’s a lot of bodies for Dublin to have committed to that area of the field if you’re not going to win possession.

It changed because Monaghan decided they were going to go long anyway and that was when Dublin really took control in the middle of the park.

It was interesting stuff from Jim Gavin even if it didn’t work.

With Tyrone in mind, this could be risky. Obviously if you have seven pushed up, you’ve only seven at the back and a ’keeper like Niall Morgan who can pick out a long pass over the top and take out seven and maybe eight opposition players.

If you’ve got the right players in the middle of the park, you’ve got a situation where a team could get at them and maybe score goals. It will be interesting to see if Dublin persist with that tactic in the semi-final.

Like Galway the previous week, Monaghan conceded the kick-outs. I mentioned last week the importance for teams to try to jolt more highly-rated opponents off course, making them think differently and even to alter their game plan if possible.

But if you’re going to hand these teams their kick-out, they’re simply going to be able to go through their routines and processes. You had the situation where Stephen Cluxton was able to kick the ball out over a Monaghan player and into the hands of a team-mate running into space.

Dublin players continued to get ahead of the ball: four uncontested passes and the ball ends up over the bar at the other end.

The other big battleground was discipline and fouls, particularly fouls around the 45 – in Dean Rock’s case – or more generally, inside the 45. Monaghan conceded five points from frees in the first half.

Between uncontested kick-outs and indiscipline Monaghan conceded six points in the first half. Subtract that from the half-time score of 0-11 to 0-3 and it’s a lot more manageable.

They’re the kind of percentages that Mickey Harte will be looking at in the next three weeks: how can they keep the game incredibly tight and competitive and also bring enough to the table themselves so that they can really ask questions of Dublin?

Like Galway, Monaghan decided they were going to play 13 or14 behind the ball. Also like Galway they decided to give up the middle and first third and set up defensively along the 45. This is a concept I struggle with, to be honest.

In certain situations and in certain games, yes; there is potential for that tactic. But I would ask why a team can’t do both.

Why can’t you be very aggressive, purposeful and intent on stopping the opposition building the play while they transition?

And at the same time while you have two or three players exerting real pressure trying to force errors and turnovers, the other players are dovetailing back and making sure you have the defensive shape you want along the 45.

I don’t understand why it has to be one or the other.

Dublin are managing to run the ball up the field with their heads up and looking for options because they’ve nothing else to bother them. If you want to knock Dublin off their perch, psychologically ruffling them is a prerequisite.

Jack McCaffrey kicked Dublin’s sixth point and it was a classic example of what we used to call in Donegal the ‘hope you miss’ attitude. He got around four or five players but they were hoping he wouldn’t score rather than throwing everything at him trying to make sure that he didn’t.

I believe that Tyrone believe they are good enough. Mickey Harte will be fully aware of the tactical requirements and the aggression and ruthlessness needed to take Dublin on in the semi-final.

If you do – and this is an important point – bring all of those things to the table, all you get is the opportunity to compete with the big teams. It doesn’t mean that you’re going to win but if you can’t get even as far as that table it means you’re going to lose.

I don’t think Monaghan gave themselves the opportunity to compete.

Tyrone will and the positive consideration for them is that their game will suit taking on Dublin. It’s predicated more on running the ball than kicking it and they do that very aggressively. If Dublin are going to go plus-one at the back, then Tyrone will be plus-one in running the ball from deep. What happens then?

Do Dublin push out to stop the overload coming from deep or look to keep the numbers at the back to protect your full-back line? This game could get very interesting.

With Mickey Harte working on it for the next few weeks, questions will be asked.

The big one is, have the Dublin forwards the ability to play under extreme pressure? I’m not so sure. I suspect that some of the old failings are there under the surface but very few teams are able to take Dublin to places where these questions get asked. On the very few occasions that Monaghan got any meaningful pressure on the Dublin forwards, they missed.

The big question for Tyrone is whether we are getting a proper read on Dublin. The difference between the teams will be that one is going for a three-in-a-row whereas the others are pretenders with the dynamic of a young team going in as underdogs.

They’re hungry and double Ulster champions and outsiders. It’s really set up for them. All the talk leading up to the weekend was about the hurt of last year so they go in with a focus of wanting to take these guys down and I think that attitude better suits a defensive team than one trying to play their way through.

Maybe I’m reading this wrong and Dublin have fully morphed into a team that is very comfortable facing a packed defence but the truth is we don’t know.

There’s something not adding up when you have a player like James McCarthy able to run more or less wherever he wants with hardly a finger being laid on him and you have passages of play where possession is kept for an uninterrupted minute. In an All-Ireland quarter-final where if you lose, you’re out!

You need extraordinary conviction to take on the top teams as well as the right tactics.

The one thing we can guarantee with Mickey Harte is that he will be excellent at squeezing the percentages. The big question is can they drag Dublin into a brawl? Can they create enough energy to jolt them off course and disrupt their natural patterns? Ultimately can they force Dublin to play another way?

If the answer to those questions is yes and they bring their kicking boots we could be in for the game of the season.

Remember though that any time Dublin have been dragged into a scrap in the past number of seasons, they have always ended up on the right side of the result. So if everything runs to form something will have to give.