Jim Gavin: ‘Composure has been the hallmark of these guys’ 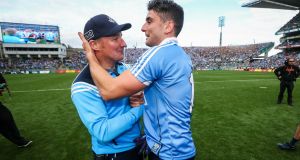 Jim Gavin and Stephen Cluxton present themselves in similar fashion to Igor Rimsky and Ivan Drago before Apollo Creed was so ruthlessly dispatched in Rocky IV.

It takes some fresh air to remember the joyous feeling sweeping across the capital.

But this is what winning looks and sounds like. This is Dublin in 2017. Maybe it was also Dublin in 1977. Of course, Kevin Heffernan and Tony Hanahoe only took Sam Maguire home thrice in that decade.

This is different, this is better. Sterner.

Someone opens with a joke. How’s the heart, Jim?

Those last few minutes, Jim, that agonising ending when Dublin players took hold of time, and held it, what is this composure we see in them?

“Yep, you are on the money with that one,” said Gavin about how the battle was won. “Composure has been the hallmark of these guys. They work so hard at their game. Very disciplined in what they do, the sacrifices they make to play Gaelic games is phenomenal.

“That composure you mentioned . . . when they went two points ahead and had the crowd behind them – there is a perception Mayo had the momentum but in the last quarter we probably outscored them four points to one.”

Paul Mannion made it a one-point game on 63 minutes. James McCarthy strode forward to level it on 65 minutes. Seconds later, Dean Rock had a sight of goal but opted to punch over for the lead. Cillian O’Connor levelled it up as he did a year before but Rock, via Diarmuid Connolly drawing a free from Chris Barrett, had the last say.

“I missed one in the league final against Kerry,” Rock instantly remembered, “Just glad I got this one. That is my job for Dublin, I put them over the bar.”

Gavin, clear eyed and unemotional, added: “That shows how present the Dublin players were in the game. For them to turn it around and finish so strongly was satisfying.”

Nothing more, nor less. Process and procedure equals dominance.

Elation is for others. For the city. In a public forum, these men remain relentless and unbending in their pursuit of excellence.