Kingdom hoping to hold on to gifted David Clifford 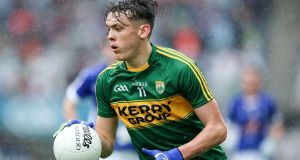 The village of Fossa, already intimately acquainted with star magnetism as Michael Fassbender grew up there, would presumably be content for the wider sporting universe to learn little more about David Clifford.

That became increasingly difficult after the Kerry 18-year-old’s spinning masterpiece in the 2016 Hogan Cup final or his solo effort which sliced Galway open to clinch last year’s minor All-Ireland.

This season’s return to Croke Park, featuring a coolly-assembled 1-10 against Cavan in the semi-final , felt almost unfair on the other teenagers.

“He has always looked like an adult player playing at underage,” said former Kerry manager Pat O’Shea.”Physically, he was always more developed than a lot of the other boys but what really separated him was his skill set. And he has the football brain to go with it.”

Most inhabitants of the Kingdom desire a way to keep their own Tadhg Kennelly and his Australian dollars at bay.

Battle lines are clearly drawn: the love of community, of the GAA’s amateur ethos, in direct conflict with modern sporting reality.

Clifford will not be long revealing if that’s even a debate anymore.

Some see Maurice Fitzgerald reincarnated. Others, a footballing Joe Canning.

“First time I saw him was at under-14s and he was a revelation,” remembered Fossa and former Roscommon manager John Evans. “Reminded me a bit of Ciarán Kilkenny; a strong lad, can score with both legs, with a lot expected of him but he rose to the occasion every time.”

Clifford, already in second year of his Tralee IT scholarship, is set to slide into senior football two seasons after the Colm Cooper’s inter-county career lies beneath the ground.

Or, perhaps prompted by the hassle surrounding Cooper corporate testimonial dinner next month, Clifford will disappear. He could be lost as soon as Kerry gather a fourth straight minor All-Ireland on Sunday.

“If I met him tomorrow I’d say straight up: ‘Tadhg, I’ve nothing against you personally. But I hate what you’re doing’,” wrote Ó Sé in The Irish Independent about the AFL’s international talent co-ordinator. “I think Clifford leaving would be the straw that broke the camel’s back.”

The threat is real.

“It is no longer a case of they may, they are,” Evans agreed. “He is going to have to cope with that but his dad, mom, his uncles, his aunts are all ingrained in GAA so much I think they will have a strong bearing on what way he decides. But he is such a talent he is going to be approached.”

Pat O’Shea is not convinced by the lure of Aussie Rules.

“The Australian model has not proved overly successful when it comes to the retention of Irish players. We have obviously lost Mark O’Connor recently but it is a good guide to see how he develops before David makes a decision about following.

“I think sending him to the hotbed of Australia where physicality is higher again and the risk of injury is higher again and we have seen how hard it is to break in there, even if you have the skills you probably need to have a far more mature outlook in your life before you go.

“But, is he capable? Yeah, I’m sure he is being courted. I’m sure the rumours are true. I’m sure that option is on the table.”

There are three men Clifford can, and may already have, sought out:

O’Connor, Kennelly and the cautionary tale that is Tommy Walsh.

Walsh, 29 now, and once a colossal figure, should be entering his prime as a Kerry footballer. The 2008 Young player of the Year took the professional road but after moving from St Kilda’s to Sydney Swans, where he made five appearances over three injury-ravaged seasons, he’s been home since 2014 and is no where near the Kerry team.

“Most players will tell you they would love to be part of a professional sports system,” said O’Shea. “We obviously don’t have that and I don’t see that happening in Ireland in the near future.

“All we can do as an association is provide the best model that we can to take care of the players that we have and offer them as many opportunities as possible. What we have always prided ourselves on is we are a community-based organisation and while financially people would always have an incentive to go somewhere else I think we are lucky that we do have people who value what the GAA stands for, and obviously players in all counties progressing to senior inter county they do get some of the perks that go with that kind of adulation and exposure. So I do feel in time there will be more opportunities.”

“I do. They do have a different mindset and carry themselves in a very professional way – nutritionally, conditioning – but I do think they very much follow in the footsteps of previous generations. Playing inter-county football is still a huge thing. Those values are still very strong.

“What separates us is money certainly – but it isn’t the answer to motivate people to be very, very good. We see that all the other sports have that. Their love, their value, their motivation within those sports is certainly very different to what we have.”

If Clifford remains in Fossa the next debate is whether to fast-track him into Éamonn Fitzmaurice’s senior panel or grow him through Jack O’Connor’s under-20s.

“He’s a long way to go,” adds Evans. “I’ve seen super heroes at 18 that never made it. If we rush them they will be blown off the park. I saw it in Roscommon. Despite contesting All-Irelands at minor and under-21 they weren’t ready for Mayo men.

“It takes two years to be able, to learn how to cope and they need mature players on the field to protect them. One or two at a time has always been the Kerry way but I have no doubt it is going to come and hopefully, like a tsunami, this crop will wash over the rest of the country!”

Probably true, with or without Clifford.