Mayo boss Stephen Rochford: ‘It just wasn’t to be’ 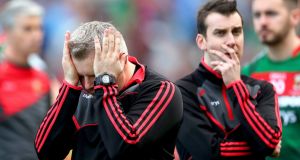 Nothing about losing an All-Ireland football final ever gets any easier, and in the emotionally filled aftermath of this one Stephen Rochford is visibly struggling to find the words to make some sense of it all.

Because even against the backdrop of Mayo’s eight finals lost already since 1989, this ninth final defeat- by the same one-point margin as last year’s replay defeat to Dublin - comes in crushing standalone terms, and right now the Mayo manager knows and feels that more than anyone.

How can he begin to sum it up?

“I don’t know,” begins Rochford, after a long pause. “You come second in two All-Ireland finals by a point?”

“You can just tap your cap to Dublin. Today was really just about them, in fairness, a phenomenal achievement to win three in a row, sincere congratulations to Jim [Gavin], and to Stephen [Cluxton].

“It just wasn’t to be. We rattled the post with a free kick in injury time, and Dean Rock, and not to take away from the enormity of the kick, but a slightly easier kick, maybe, or slightly easier angle. And he nails it, and that’s the margin. So, sport can be cruel. No more than that in 70-plus minutes.”

Mayo did so much right in the first half, only for some things to unravel in the second - such as a straight red card for full back Donie Vaughan (at the same time Dublin lost John Small to a second yellow)

“It will be easy for us to jump on that,” he says. “To be honest I genuinely didn’t see the incident because we were trying to get a sub on, get Diarmuid O’Connor in at that time.

“But today isn’t about a sending off, or a not sending off. We’ve come second in an All-Ireland final to a better team on the day and that’s where we have to be with it, you know?”

Nor does Rochford for one second buy the suggestion that this their 10th game of the summer eventually took its toll against a fresher Dublin team.

“Not at all. We played what three minutes of injury time in the first half, 77 minutes in the second half, so over 80-minutes, and we’re chasing down Dublin who are masters of possession, and maybe an inch or two from getting a dispossession, so no, I certainly don’t believe there was any tiredness in there.

“At certain times maybe, after we scored the goal, Dublin came back and kicked two points. We weren’t able to build the margin maybe that would we have liked but that was nothing in relation to fitness or mental fatigue or anything like that, which undermines coming second.”

A point up at half time, the only plan at that stage was to keep doing that they were doing.

“If you’re a point up, you’re just trying to do the same again. We created a lot of good chances. They scored the goal after a couple of minutes, then we held them maybe two or three points from play over the course of the next 30 minutes, so we felt we were doing a lot of things well, and it was just going out to repeat that.”

What kept Dublin in that first half was Con O’Callaghan’s goal after 90 seconds, a moment of individual brilliance which also few drew plenty of attention to the number of steps he took.

“I don’t know. I thought it was just a fine finish for a guy starting his first senior final, so congratulations to him.”

That seems to be his only feeling right now: to congratulate Dublin, and leave Croke Park with the knowledge that nothing about losing an All-Ireland final gets any easier, only worse.