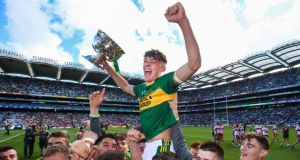 Kerry captain David Clifford celebrates with the trophy and his team-mates after the All-Ireland minor football championship win over Derry at Croke Park. Photograph: Tommy Dickson/Inpho

Forever after this will be the David Clifford final. The prince of teenage footballers these past two years, an enormous will exists to ensure he’s never allowed dwell outside the kingdom’s borderline.

“I don’t know where the media get all this talk [of Clifford potentially moving to Australia to play in the AFL],” said Kerry manager Peter Keane. “This guy is embedded in Kerry GAA.”

Now, more than ever before in their history, they desperately need this to be true. They need David Clifford to grow old in Fossa.

This phenomenal display was a privilege to behold. The Hill swelled and gulped at a foreboding glimpse into the future.

Kerry have unearthed a shining jewel to place alongside Gooch Cooper, Maurice Fitzgerald and Jack O’Shea. Because Clifford shows a little of them all, and remains uniquely his own glimmering self.

Slippier than a conger eel, he climbed the Hogan steps armed with a beautiful 4-4 and so much more besides.

But, really, what was incoming Derry senior manager Damian McErlain thinking to leave smaller full back Conor McCluskey all alone on this towering presence that arrived with 4-37 already banked in unforgettable summer?

“People kept asking me about Clifford but I was saying they had 14 more and they all showed up,” McErlain argued unconvincingly.

After other events on this day Kerry cannot – they must not – lose him.

And they know this.

Clifford’s display of wondrous foot passing was as valuable as each score he gifted the ever growing Dublin audience on the Hill.

Still, Derry’s tactical approach was mismanaged. You cannot duck under a tsunami and just wait for it to pass unscathed.

“We were expecting a more defensive set-up from Derry,” shrugged Clifford before collecting the Tom Markham Cup, the fourth successive Kerry captain to do so. “I suppose they didn’t do that!”

To leave McCluskey isolated on the square’s edge beggars belief. There was a blueprint from 2004 that, clearly, Derry ignored. A brilliant Kerry minor side limped out of Croke Park that year with Darran O’Sullivan, their seemingly unmarkable star, dragged to ground eight times by seven different Tyrone players, all out of scoring range.

Small differences were apparent as Leo Varadkar was introduced to the stadium. As Derry teenagers were in a very tense looking huddle listening to a mentor’s drawn out speech, Kerry’s entire panel were freewheeling like any winter night under lights in Currans. Just playing rapid keep ball. Clifford had the instant command of his pals, taking down balls one-handed like a modern wide receiver.

The game started then ended 10 seconds later. Midfielder Diarmuid O’Connor saw Clifford under Hill 16, arm raised. His clean catch was followed by stepping off his right and rifling a left foot bullet to the net.

Not four minutes were clocked when another, this time lower, ball came in. McCloskey was on him like glue but a perfect foot pass found Dónal O’Sullivan. Point.

Derry, while clearly stunned, did respond with Mark McGrogan’s 0-2 and a Lorcan McWilliams score even promised a contest.

But on 13 minutes the result moved beyond any doubt. Clifford, unbelievably still not double or triple marked, ran through McCloskey, proving unfoulable in full stride when glancing off goalkeeper Oran Hartin before making it 2-2 to 0-4.

The third goal was finished by Fiachra Clifford after a Clifford foot pass that any great player from any era would go to the grave remembering the warm feeling of perfection in his bones.

The Derry management murmured to each other on the sideline. But it was too late. Kerry already led 3-7 to 0-5 when Richie Mullan ended their 16-minute scoring drought.

By the time McErlain reacted, putting his captain Pádraig McGrogan on Clifford’s shoulder and an occasional human shield in front of them, other Kerry players made use of Clifford becoming the decoy.

Up the other end Callum Brown arrived to cause some havoc but after winning a penalty, scored by Patrick Quigg, the Kerry defenders figured him out. Next time Brown landed to earth he was met by four embracing bodies.

McGrogan couldn’t contain Clifford either. The fifth Kerry goal ruthlessly proved as much. For the sixth he even had time to fumble the ball before recovering to score.

It could have been seven, or eight. The Gooch and others are gone but so many more are taking their place. Australia can have Mark O’Connor but surely the Kingdom will keep Clifford.

Kerry running wild in September. Another great wave visible on the horizon.