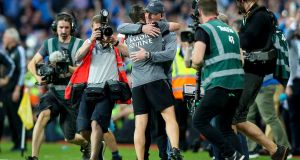 Dublin manager Jim Gavin celebrates at the final whistle after seeing his side beat Kerry to win their fifth All-Ireland title in a row. Photo: Tommy Dickson/Inpho

The end of an era. After seven years, six All-Irelands, seven Leinsters, five National Leagues and a host of other achievements, Jim Gavin has called time on his Dublin managerial career with history made and the sport changed forever.

While not entirely unexpected, the news did come as somewhat of a surprise on Saturday afternoon after all had gone quiet following Dublin’s All-Ireland final replay victory over Kerry in September.

Interestingly no member of the Dublin senior panel has tweeted about Gavin’s departure as of yet but there were plenty of tributes elsewhere.

On Newstalk’s Off The Ball, Joe Brolly said he thinks it was the right time for Gavin to finish. “He’s 48, the five-in-a-row has been accomplished and he has a very busy life outside of Gaelic football. He got a new job in Brussels and anyway, what does six in a row mean? It’s probably come at the best time for him.”

Brolly wouldn’t be drawn on whether Gavin is the greatest coach in Gaelic football history but he did say that one of the most admirable aspects of his time at Dublin is the culture of humility he created.

“I spoke to John Costello (Dublin county board chief executive) this week when I was getting some figures on expenses and he was saying that we could never get him (Gavin) to claim expenses. He never claimed expenses. Most impressive was the culture he created where players had their feet on the ground and were active in the community.”

Dessie Farrell has emerged as the early favourite to replace Gavin and take on the task of winning a sixth All-Ireland in-a-row. Brolly expects Dublin to do exactly that next year and believes they could be even better than they have been.

“I don’t think they’ll have any difficulties with motivation. In fact next year they’ll probably play with greater freedom and I fully expect them to be better next year and probably win the All-Ireland.

On Twitter, one of the first to pay tribute was Kieran Donaghy who was part of the Kerry team beaten by Gavin’s Dublin in the 2015 All-Ireland final.

“5 in a row, what a way to bow out. He finished what Gilroy started in some style. Attention to detail was unreal I’d say, summed up this year. Down a point in added time this year, down a man= keeper to full back full back pushes out to pick up spare man = turnovers,” he tweeted.

Speaking to RTÉ Radio 1 fellow Kerryman Tomás Ó Sé said that replacing Gavin will be far from easy and it could open the door for other teams to knock the Dubs off their perch.

“It is going to be a tough job for Dublin to replace him,” he said.

“They are still a very successful team, the show goes on.

“Dessie Farrell is a name [that might be in the mix] because Gavin came in from the U21s.

“Everybody will say, ‘ah he had the players’ and everybody talks about the culture of Dublin and how they are empowered as players to produce what they did on the field – it was Gavin who did all that.”