‘Sometimes when you get an opportunity . . . you have to push yourself to the top of the water’ 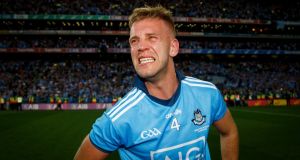 It’s getting on for half-nine on Saturday night and down under the Hogan Stand, giddy Dubs are skipping by, hunting for porter. Jack McCaffrey and Diarmuid Connolly disappear into the players’ lounge and return with jar in hand, headed back for the Dublin dressingroom. Ciarán Kilkenny and James McCarthy palm us off with smiley ease. “Heading for a pint, lads,” says McCarthy. “See yiz after.”

The one Dublin player who isn’t fizzing like an over-shook bottle of pop is Jonny Cooper. We catch his eye and ask for a word. To our slight surprise, he says yes without a second’s thought. Throughout the chat, he speaks quietly and intensely, as if part of him is still haunted by his ordeal in the drawn game.

“Yeah, big difference,” he says. “I’m just very grateful after the first day. Ah, it’s not about me, but yeah, the first day was tough for a couple of hours and then it was a matter of getting myself reset to go again. I was very grateful for the chance to do that. I owe a lot to the lads for giving me a second shot at it. I’m really proud and really humbled, to be honest.”

Cooper is a six-time All-Ireland winner now. Along with Stephen Cluxton, James McCarthy and Ciarán Kilkenny, he’s one of only four players to start all eight finals under Jim Gavin, including two replays. He has enough credit banked down through the years for Gavin not to worry about sending him out again after the first day, roasting or no roasting, red card or no red card. It was always going to take a bruising fortnight but Cooper has been through worse and come out the other side.

“A lot of self-reflection. Certainly initially, a bit of self-pity too. And then maybe after two or three days, I tried to start flipping that on its head. I guess I have experiences, personal experiences, to know that sometimes things can happen for a reason.

“And sometimes when you get an opportunity, like I did again, you have to push yourself to the top of the water as quick as you can. I needed to get in around the lads and just keep the drive and energy as much I could. It took a couple of days to flush it out and get into normal mode.

“If we had lost, I’d have had the crosshairs on my head. We drew, so I probably didn’t have as many. I put the team in a tough situation, to battle for the second half and they did very well. It was a hard one to try and process because you had 13 days to turn it around and you’re trying to park it as best you can. But you’re also realising that you’re a big reason why we didn’t function as we would have liked to. That’s certainly not what I train and prepare for.”

Given that he can be such a scourge on opposition forwards, it’s probably no great surprise that Cooper doesn’t spare the rod on himself. We bring up David Gough and he doesn’t try to lay any blame in the referee’s direction. Though they both work in DCU, Cooper says he doesn’t know him particularly well, only to say hello to. But it wouldn’t matter who had the whistle, Cooper knows he got himself in his own mess.

“I’d always be of the opinion that you get what you deserve. I put myself in the position and in certain situations in terms of the penalty and the frees and so on. They were tight calls, in my view. But maybe when the officials do their debrief, I’m sure there were technical aspects that they saw. Tight calls, yeah. But I know that if you put yourself in those situations, you get what you deserve.”

Cooper had a much better night on Saturday. With Paul Murphy sweeping at the far end, he was often the spare man at the back for Dublin, frequently getting forward to add a bit of thrust to the attack. When it was all over, as the rest of the Dublin team followed Cluxton up the steps of the Hogan Stand, he broke away and went around the Kerry squad and shook each hand individually. He radiated relief and atonement.

So here they are, the five-in-a-row tucked away, greatest team of all time chat heading their way. Now that it’s over, they can talk about it. Or listen to it, whatever they prefer. We ask Cooper if any of it means anything.

“Not really, to me,” he says. “I don’t mean that in a flippant way or a disrespectful way. I know you guys are sick of hearing the process stuff but it’s served us well in the past so we’ll keep at it. It’s a massive achievement for the group in the grander scheme of things but right now, it’s just a really happy moment. Maybe in the next few days, the achievement will settle in.

“Ah, it’s a funny one. I guess we’re in our own little bubble and we try to stay there as best we can. We probably don’t listen to or hear any of that. It does come up in those conversations. But I don’t know – how can you say for sure you’re the greatest team of all time? Titles, maybe? But I don’t know, maybe it’s what you give back to others or how you impact your community and so on. Maybe that comes into it, which I’m sure Kerry do in their own way in theirs.

“I don’t know – accolades and all that kind of thing, that’s for you guys to vote on or talk about. Pundits will have their opinion. If that’s what’s being bandied about then, it’s a nice thing to be associated with.”

And with that he shakes hands and walks off. Maybe hunting for porter with the rest of them. But definitely carrying a bit of peace he hadn’t had access to a few hours earlier.