Mayo make it three from three with Cavan win 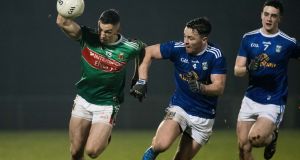 Mayo made it three wins on the bounce as Cavan slumped to their third successive league defeat in Saturday’s league encounter in Castlebar.

However, it took a controversial goal just before half-time to put Mayo in charge against a Cavan side that came up short once more in the finishing department.

Adding to their woes, Cavan played with 14 men for the last 10 minutes when Stephen Murray picked up a second yellow card, and at that stage Mayo had established a 1-11 to 0-9 lead thanks to back to back points from substitutes Donal Vaughan and Brian Reape.

A man of the match performance from Ger Cafferkey at full-back for Mayo ensured Cavan never looked like scoring the goal they needed desperately to have any chance of pulling off a shock - as Mayo manager James Horan can reflect with a lot of satisfaction on three games in which he has given some of the young guns their chance and most of them have grasped their opportunity with both hands.

Mayo led by 1-7 to 0-7 at half-time but Cavan will feel very hard done by as the goal, which came just before the break, might well have been disallowed.

It came via route one with a long ball in the square from debutant Matthew Ruane which appeared to be under the control of Cavan goalkeeper Raymond Galligan before Evan Regan came thundering in on both ball and ‘keeper. The ball ended up in the net and a goal was awarded.

It was a score Mayo badly needed as they had been under a lot of pressure in the opening 15 minutes in particular as Cavan went 0-4 to 0-1 up after seven minutes - Dara McVeety, Jack Brady with two frees and goalkeeper Galligan also landing a long range free, their early scorers.

By the 18th minute Mayo had drawn level, Andy Moran who opened Mayo’s account from a mark adding a second, Fionn McDonagh and Jason Doherty (free) were soon after also on target,

A point from a mark from Aidan O’Shea and another Doherty free saw Mayo kick on by two again but Conor Rehill, made it a one point game just before the controversial goal arrived. Rehill then added a second from play to keep Cavan still very much in the game.

However, Mayo turned the screw in the second half with their subs’ getting them over the wining line and Aidan O’Shea making his presence felt in a more forward role.