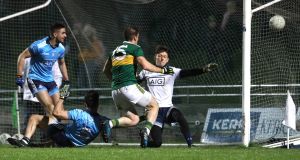 Wow. Football may be losing some appeal, Dublin may be getting richer, only the greatest rivalry ever told will never grow old. Especially when kept as close as this.

And so much for the backstop. Both teams went after this as if there were no borders, Kerry setting the pace from the b-of-the bang, hitting Dublin with 1-11 in the first half - all play out live and loud in front of a 11,982 sell-out.

Truth is Kerry needed this win to give that rivalry some fresh injection, handing Dublin a second league defeat in their three games this season, perhaps giving the rest of the country a little more hope too.

That rivalry turned a little sour after the final whistle, players from both teams getting involved in a few farewell punches, before breaking away. Duly noted, no doubt, somewhere inside.

Dublin, as has been their modern trade, came back at Kerry at the death and looked to have spooked them once again. Kerry hadn’t scored since the 55th minute, and with came the announcement of five minutes of injury time, at which point Kerry were hanging on to a one-point lead.

As if on cue up stepped Cormac Costello to level it for Dublin, from a free, the first time the sides were all square since the opening minutes, And yes, Kerry appeared in that moment to panic.

Only when a steady head was looked for they found it in replacement David Moran, one of their few surviving senior All-Ireland winners, to set up defender Peter Crowley to palm it over the bar, Kerry back in front by one, Brian Fenton had one last chance to level it again for Dublin at the death, only his shot drifted high and left and wide. Wow.

Central to that 1-18 tally once again was Sean O’Shea, the Kenmare forward hitting 0-8 on the night, including one from play, but this victory was built from the back as much as the front, beginning with corner back Brian Begley, hungry like the wolf for every ball that came his way.

The All-Ireland champions came to Tralee with one win from two league starts, and trailing by four times going into the last quarter hour, needed to call on all they had to get level, manager Jim Gavin emptying his bench as they tried to match Kerry’s insatiable appetite for football. On the night it just wasn’t there.

Kerry were up by two points at the half, 1-11 to 2-6, and kept that advantage on Dublin on the early run of the second half, before just about falling over the line. They’ll take it, especially after a similarly young Kerry team were dismantled by Dublin by 12 points in Croke Park this time last year.

It started like a landslide. Jack Sherwood came up from fall back to opening their scoring O’Shea was once again inch-perfect with the placed ball, with Stephen O’Brien and Paul Geaney also firing over beautifies from play, both showing a little too much pace for Dublin to handle.

Then just over 20 minutes in, they hit Dublin where it hurt, under the high ball, Dara Moynihan sending in the long ball, latched onto by O’Brien, who finished brilliantly. With that Kerry were up, 1-6 to 0-5, Dublin's opening scores coming mainly from the frees of Dean Rock.

Then Dublin hit back on Kerry; having got two games without conceding a goal, Kerry conceded two in relatively quick succession, the first a typically brilliant solo from Con O’Callaghan, finished off his left foot, helped by a slight deflection off Brian Begley. Eight minutes later, Paul Mannion landed Dublin’s second, picking up a line ball and giving Shane Ryan little chance.

With that we all paused for breath at the half, Kerry up by two, 1-11 to 2-6, still everything on the borderless lines.

Dublin goalkeeper Evan Comerford won’t want to see the DVD, gifting Kerry a point early in the second half with a miscued kick-out, tapped over by Kerry replacement Tommy Walsh; Dublin also finished with 14 men, Mick Fitzsimons picking up a second yellow card on 63 minutes, having been booked

The Tralee air, cool and dampened by spraying February rain - was dense with expectation for an hour before throw-in; the crowd taking their seats, their spot, with time ample time to soak in up too. Both teams fielded teams loaded with All-Ireland medals; Dublin at senior, under-21, and minor level; Kerry also exclusively at minor level.

Gavin’s obligatory changes before throw-in numbered three, mostly tactical: Con O’Callaghan for Liam Flatman, Brian Howard for Ryan Basqual, though Darren Given did get his first start, up front for Sean Bugler.

No David Clifford for Kerry, the teenager, named footballer of the year at the Kerry sports awards last night, still sitting out the league as he recovers from a shoulder injury. No Moran either from the start either, the Tralee local named to start at full forward, only to be replaced by Gavin O’Brien.

Throughout, Kerry were well up for the hefty, speedy challenges. Rumours of Jason Sherlock’s departure from the Dublin backroom team, by the way, dismissed by his name appearing in the match programme, the man himself then appearing on the sideline as usual.

For Kerry manager Peter Keane, his senior managerial debut against Dublin certainly a night to remember. It won’t be easily forgotten for anyway in attendance, actually.