Galway announce themselves with win over super bad Kerry

David Clifford scores 1-5, all from play, as Paul Conroy breaks his leg in flat contest 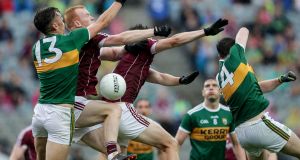 When you’re bad you may as well be super bad. In a game where nothing appeared worthwhile other than the end result, Galway rocked and then rolled over Kerry and finally beat them in the football championship for the first time since Bob Dylan went electric.

It’s a long time since 1965 and an equally long time since Kerry played this badly. The Munster champions only hit double-digit scores in the seven minutes of injury time and by then Galway had taken them apart and laid the pieces all over the Croke Park. It was the full dismantling of Kerry’s atomic bomb.

Kerry had scored 3-50 in their opening two games to get this far, and at least some of that firepower was expected to land down on Galway. Instead they only thing that landed on Galway for most of the game was the soft misty rain, and the more the game wore on, the more Galway simply licked it off.

They hit Kerry where it hurt - their midfield taken out of it and so too much of their essential pace. Galway’s only hurt came in the properly painful sense when they lost their midfielder and leader Paul Conroy, who sustained a double-fracture of his left tibia after an accidental collision with Seán O’Shea after 22 minutes. After being treated for five minutes on the field Conroy was taken away on a medical buggy, his season over.

Galway, undaunted, still rose to whatever Kerry threw at them. There was some shocking misfiring at both ends throughout, but Galway kept their heads and spirit to make more of the chances count. Shane Walsh didn’t miss a free in the Connacht final and was equally accurate here - hitting four from four, plus one from play, his 0-5 one of standout performances of the afternoon.

Ian Burke and Sean Kelly chipped in with key moments too and Patrick Sweeney wasn’t long off the bench when he finished off the Galway goal in the fourth minute of injury time, Walsh and Burke igniting the counter-attack that deftly set him up in front of goal.

By then Galway were up 1-13 to 0-9, and Kerry already on their knees. Manager Eamonn Fitzmaurice had emptied his bench in the hope of making a difference, but none of them did. Kieran Donaghy wasn’t among them but that wouldn’t have made any difference either, given how easy Galway were handling them.

Kerry also lost Killian Young to a straight red card on the hour mark, for an off-the-ball strike on Burke, a pure sign of their frustration. Their last two scores came at the death from David Clifford, a free and then a goal from a breaking ball that simply caught Ruairi Lavelle off guard. Clifford finished with 1-5, clearly their best of a bad lot, James O’Donoghue and Seán O’Shea left empty-handed, Paul Geaney and Stephen O’Brien both guilty of some soft misses.

It was a masterful display by Galway manager Kevin Walsh on several fronts: his players stood up and got stuck into Kerry early on, starting with the Galway defence, forcing enough turnovers and spillage of ball to immediately unsettle Kerry’s nerves. Both teams were kicking more wide balls than imaginable, and after half an hour, Galway had just three points to Kerry’s two - with nine wides between them.

The rewards of it may prove fruitful too: it was actually Galway’s first championship win in Croke Park since they won the All-Ireland here back in 2001, and immediately gives them pole position in Group 1 of the Super-8s, this also expected to be their most difficult assignment.

Galway face an already defeated Kildare in Newbridge next Sunday, while Kerry head to Clones to take an already victorious Monaghan. No prizes for guessing the more daunting assignment - another loss ending Kerry’s Super-8s interest.

Galway can play better too: Damien Comer was relatively quiet, scoring only once from play, while Adrian Varley will be pressing hard for a starting place the next day after scoring 0-2 off the bench. Declan Kyne and Johnny Heaney were electric down the wings and Gareth Bradshaw typically central to the defence, taking total hold of O’Shea. They also finished with 14 men after Eoghan Kerin saw a second yellow for a deliberate foul on Clifford at the end of added time, but again it made little difference to Kerry’s chances.

Can Kerry be this bad again? All six of their first-half wides could have been converted with a little more composure, and in truth the wet slippery conditions didn’t suit their fast handling or carrying off the ball. The bigger problem was trying to break through the Galway defence, their lack of one decent goal chance before Clifford’s late effort just one indication of that.

“It’s as poor a performance as we’ve had,” admitted Fitzmaurice, the Kerry manager looked suitably stony-faced. “We didn’t turn up, from the off we looked to be a yard off the pace, but the better team won. Galway won all the battles and at the end David’s goal put some respectability on the score board, but we just weren’t good enough.

“We were predictable up front, weren’t dynamic or active the way we can be. It is disappointing, there’s no getting away from it. But we knew it would be a huge jump from the Munster championship, we weren’t getting carried away with that, same as we won’t get carried away with this.

“I think the game will bring us on. We are well aware we’re a work in progress. We are going in a direction but when you are doing that you can get caught and today we met a Galway team that were a bit more streetwise, further down the line, and deserved the win. They are big time contenders but I wouldn’t have needed today to confirm that.”