GAA Statistics: Who should Patrick Durcan and Lee Keegan track? 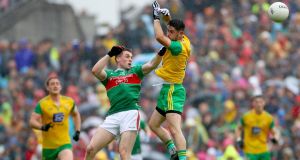 With Diarmuid Connolly unlikely to start for Dublin in Saturday’s All-Ireland semi-final, who will Lee Keegan pick up? And who will Mayo’s other tracker, Patrick Durcan, mark?

Only one player in his last five championship matches has scored on Durcan, while Keegan has marked 13 players this summer and only four of them have scored, and none more than a point. The trip to New York aside, the duo have 0-12 between them, and 0-8 against.

With Connolly on the bench the last time the teams met in the championship – the 2017 final – Keegan picked up Ciarán Kilkenny. And held him scoreless. So often the conductor and most consistent scoring threat for Dublin, Kilkenny is behind both Paul Mannion and Con O’Callaghan in the scoring charts in 2019. So who are Dublin’s danger men?

They have had 20 different scorers from play this summer, and with 0-17 Paul Mannion tops the list and Callaghan is next after scoring 2-9. Both are inside forwards. Midfield extraordinaire Brian Fenton has 2-7 in five appearances, and Kilkenny is fourth with 1-9.

Dublin’s backs and midfielders have scored 7-18 between them – an average of almost 1-4 per match. And that’s 31 per cent of the team’s overall total from play, via seven defenders/midfielders.

Where Mayo position their two best trackers will be crucial to their chances of causing an upset – getting it right in the past is one of the major reasons why they’ve been competitive against the reigning champions. This week though they must decide who in a team full of threats is the biggest - and it’s not as clear as in the past.

So it’ll come as little surprise if Keegan and Durcan end up playing midfield or half forward this weekend.

Given his scoring rate from midfield, as well as his influence in linking the play, Fenton is without doubt worth tracking. Tyrone had two on him at times in last year’s final and still couldn’t contain him. They do not have Lee Keegan in their ranks though.

Keegan is clearly not a natural midfielder, but picking up Fenton wouldn't be his first time filling the role. In the 2017 All-Ireland quarter-final Keegan picked up Roscommon’s Enda Smith in the middle of the park. He scored 1-3 as well as shackling the Rossies’ best player.

Not including the Connacht preliminary round win over New York, when the hosts scored just four times in the Bronx, Keegan has only conceded 0-4 so far this summer in seven matches. He has marked 13 different players and has scored 0-6 himself.

In the provincial semi-final defeat to Roscommon perhaps a lack of respect could be detected by Mayo’s decision not to assign Keegan to any particular opposition forward. After Cathal Cregg had torn Keith Higgins for an early goal though, he was quickly dispatched to quieten a player he has a history with. Cregg was fouled for a converted free but had no shots. Keegan kicked a point and a wide.

Cregg was replaced by Enda Smith for the final 20 minutes, and the Boyle club man did score a point from 40m, while Keegan took two further shots late on.

Along with Smith - Michael Murphy, James McEntee and Sean O’Shea are the only other forwards to have scored from play on Keegan in the 2019 championship. They all scored 0-1.

Against Down, Conor Poland couldn’t manage a shot on him, while Keegan scored 0-1 himself and had another attempt. In the second half, after Caolan Mooney had scored a goal and blazed another goal chance over the bar from midfield, Keegan began to track him. He held Mooney to four touches, all from kickouts, and scored 0-2 on him.

He marked Jemer Hall against Armagh, but switched to Rian O’Neill after 17 minutes. The Armagh No 14 had scored a goal and been a menace to the Mayo backline. But had no shots on Keegan, who dropped one short at the other end, before departing just before half time with an injury.

The Mayo halfback only came on in the final 10 minutes against Galway because of that ankle setback, and was put on Kieran Molloy. Neither had any involvements in a score following Keegan’s introduction.

He marked Stephen O’Brien against Kerry, and had scored a point and not conceded any before picking up Sean O’Shea after eight minutes. Despite Kerry ripping Mayo apart he conceded only one score from one shot. Playing on the edge, as he does when on tracking duty, the 29 year-old did have to make some fouls but kept O’Shea on the peripheries. A man he held scoreless in the league final.

Against Meath Keegan directly assisted 1-2 but conceded a rare score to McEntee.

Then last weekend, for the second time this summer, he was out around the middle, marking Donegal captain Michael Murphy. In the first half Murphy had 10 possessions and no shots from play, while Keegan had a shot and 16 possessions.

Murphy then moved into full forward, won a penalty and scored 0-1, before Stephen Coen switched over to him and Keegan picked up Jamie Brennan. Who didn’t manage a shot either, while the Westport defender kicked a wide on the counter.

He had no chance when exposed to an aerial contest with Murphy, and the same would be the case against Fenton. But how much ball will Stephen Cluxton kick out long and would nullifying Fenton on the ground be worth, at worst, conceding four or five marks? And the momentum and energy that comes with that.

Keegan may be no match for a midfielder in the air, but he will not give an inch in contesting and will not surrender the physical battle in the engine room.

As well as sticking to his man like glue, the 2016 Footballer of the Year attacks in transition at every opportunity. He gets on the end of moves with shots and assists, forcing his man to follow him, leaving a star player on the back foot. Two of Murphy’s 10 first half touches against Mayo were inside his own 21.

Durcan has the same approach. He has only played five of Mayo’s last seven matches due to injury. He’s marked five men in those, and only one of them has scored and only two even had shots. The Castlebar clubman has converted 0-6 for Mayo this summer.

Against Roscommon he wasn’t assigned any tracking duties but picked up half forward Niall Kilroy. Durcan scored 0-2 from three shots and Kilroy had no scoring attempt.

Against Down he had four shots and held Conor Francis scoreless. Against Armagh he scored a point and registered a wide, but Stefan Campbell scored four points on him, three in a sensational final 10-minute sally.

Durcan assisted 1-2 against Galway and kept their talisman Shane Walsh from having a single shot from play. Then after missing the first two matches of the Super-8s he was played at wing forward against Donegal to track Ryan McHugh. He scored 0-3, assisted two points and kicked a wide. McHugh kicked one wide.

He set the terms. Would he be able to do a similar job on Jack McCaffrey? The former Footballer of the Year has scored 1-3 from wing back in his five appearances this summer and is in red hot form. Unlike McHugh who almost operates in a free role from half back, McCaffrey is a defender first, but is still at the heart of his team’s attacking play.

Dublin have similar level replacements in nearly every position but they’ve no midfielder capable of exerting anything near the influence of Fenton, and no player with McCaffrey’s raw pace and decision making qualities.

And then there is Connolly. His performance against Tyrone last weekend suggests he may yet feature against Mayo. And perhaps reacquaint himself with Keegan - the good old days revisited.

Albeit in a dead rubber, Connolly oozed class with 29 possessions. He spread the play and picked passes to the inside like a Blackjack dealer on a happy table. He made 13 kick passes in all, took on three shots and caught two kickouts. His only point was off his weaker left - kicked in a stream of consciousness. One of his catches was poetry in motion and he lost possession only once.

At best though he’ll appear off the bench. Mannion and O’Callaghan are likely to be picked up by the fullback line (putting Keegan or Durcan in the last line will also hold them back from attacking) - Kilkenny still is the fulcrum of the forward division and the starting attacker who requires tracking the most.

Ultimately Mayo have two defenders capable of quietening any Dublin footballer. The others will still need containing, but perhaps dealing with McCaffrey and Fenton could stop two danger men outright and cut out the source for the rest.

Whoever the duo track, they are in for a long 70 plus minutes.