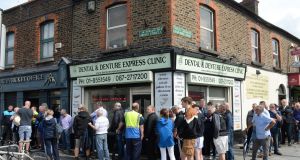 A fresh batch of tickets for Saturday’s All-Ireland football semi-final between Dublin and Mayo is expected to be made available after the first allocation sold out on Tuesday.

There were vast queues of supporters outside SuperValu and Centra outlets in both counties on Tuesday morning, while the GAA ticketing office on Dorset Street in Dublin experienced similar demands as Croke Park looks set to host its first sell-out encounter of the year.

Some people are reported to have been queuing from early morning until after lunch-time and were still unable to secure a ticket for the highly anticipated fixture.

Other fans opted to queue online for tickets with a spike of nearly 25,000 logging on at once in the afternoon before the first general sale allocation eventually sold out.

There was immense criticism of Tickets.ie, the GAA’s official ticketing partner, after its online system “paused” at around 2.30pm, leaving many fans who had been queuing for considerable lengths of time confused. Just over a half-hour later it was confirmed that “there were no more tickets available at this time.”

However, when contacted on Tuesday evening a GAA spokesperson told The Irish Times: “It is likely that in the coming days there will be a fresh allocation of tickets for general sale.

“There has been phenomenal interest in the match - a level not seen for a football semi-final in a number of years,” they said.

“A number of tickets went on general sale on Tuesday morning via a network of 370 outlets nationwide as well as online, and there was an exceptional level of interest with supporters from all over the country interested in attending the game.

“The bulk of the tickets, as always, will be distributed to GAA club members in the competing counties. In addition to this, there are roughly 7,000 GAA season ticket holders from across both counties to be accommodated.”

Tickets.ie have also confirmed that they are in discussions with the GAA regards obtaining more tickets for distribution.

Nevertheless, the online system has left a number of fans dissatisfied after they claimed to have been thrown off the system inexplicably having queued in line for hours. The high demand for tickets has also led to fears of a surge in ticket touting.

Dublin North West TD Noel Rock released a statement regarding the situation yesterday afternoon. He has recently been lobbying for ticketing touting legislation to be introduced and he claimed the ticketing operation in place, considering the high demand, was “an invitation to touts.”

“We had people contacting my office saying they had been queuing for over two hours in shops around the city and county, and had only seen a handful of tickets being printed off,” he said.

“The demand for tickets is obviously massive - and it’s great to see fans so excited about the closing games of the summer - but the set-up is certainly lacking.

“The GAA are great at many aspects of organisation, but it seems on this occasion their ticketing system has let them down. This needs to be looked at constructively to ensure it doesn’t happen again.

“I would hope that a better solution can be found for the All Ireland final and that lessons are learned from [YESTERDAY’S]situation.”

Fans from both counties also took to social media to express their dismay over the situation. One supporter claimed: “Queued for six hours, ten minutes in Castlebar today for no ticket. Apologies are irrelevant - timely service is what we require.”

Similarly, another fan expressed disappointment after he missed out on securing tickets despite having received an email claiming his tickets were ready to be purchased online.

“Waited five hours in a queue on Tickets.ie for Dublin v Mayo tickets,” he said. “One of the first 2,000 people waiting and despite getting a reminder email that my tickets were ready I was randomly kicked out and told the tickets were unavailable. What an absolute shambles.”

Meanwhile, Conor Lane has been announced as the referee for Saturday evening’s clash which will be the first time the teams will meet in the championship since the 2017 All-Ireland final, a game Dublin won by a point. The Cork man previously officiated the drawn All-Ireland final between the sides in 2016 before Dublin won the replay, also by a point.

Maurice Deegan has been named as the man-in-the-middle for Sunday’s clash between Kerry and Tyrone which isn’t expected to be a sell-out.