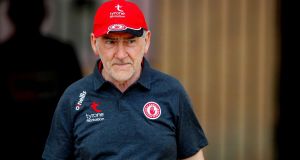 Mickey Harte: “I never seen so many people so interested in people in homes and other places around the country that can’t see television. It seems strange that these people suddenly have such a grá for these people.” Photograph: Tommy Dickson/Inpho

Monday morning at Tyrone’s All-Ireland semi-final press event before facing Kerry this Sunday, and Mickey Harte finds himself both agitated and amused that one of the weekly debates The Sunday Game panel focused on was the question of whether or not games such as Mayo’s win over Donegal should be always ‘free-to-air’.

“Aye, well,” he begins, “It does seem a bit strange alright. You would think they must have some kind of vested interest alright and ask those people who would know to give the right answers what they’re thinking. Yeah, it would be easy enough to expect what you’d hear.”

Harte’s long-running feud with RTÉ shows no sign of ever softening. Despite the alarmingly low figures that Sky TV are attracting for screening matches, he defends the GAA’s policy of selling rights to whoever they choose.

“Look, the GAA deal with who they want to deal with in terms of who they give the rights of their games to,” he states.

“I have to suggest that the introduction of Sky to the promotion and presentation of Gaelic games has helped what we’re looking at. There weren’t many graphics until Sky brought them in – did they not exist of the last 10 or 15 years? I think they did.

“I think that’s an advantage of them. We’re getting more insightful analysis, all sorts of diagrams and arrows and highlighting that didn’t happen before, so there’s something good in what’s going on there.”

In a thinly-veiled attack on those who support the argument that games of this magnitude should be available for people in hospitals and nursing homes, Harte added: “I never seen so many people so interested in people in homes and other places around the country that can’t see television. It seems strange that these people suddenly have such a grá for these people.”

That dealt with, he moved onto the disciplinary tightrope that his nephew and chief playmaker Peter Harte finds himself in. Black cards in the Ulster semi-final defeat to Donegal, followed by qualifiers wins over Longford and Cavan left him suspended for the first round of the Super 8s, against Roscommon.

Tyrone appealed and Harte was clear to play, although just one of the black cards – against Longford – was rescinded. It leaves it that should he suffer the same fate against Kerry, it could rule him out of a possible All-Ireland final.

“Why was this brought in? It was brought in by a rant, over Seán Cavanagh,” said Harte. “And that was a very clear and deliberate, intended pull down. And so, do any of the things that Peter Harte done, remotely resemble that? That they could be considered clumsy, deliberate, ill-timed, but in the context of it, why would he want to do that after 10 minutes of the Donegal game?

“Commit a foul that he knew would get a black card and commit to trip somebody? Not a chance. And equally so in the Cavan game, even more ridiculous, we were leading by about 14 points, the game is over and there was no reason anybody would want to do that.”

Next up, the vexed question of Dublin’s dominance was up for discussion. Trying to find opposing managers to bemoan it is difficult, but if the figurehead of a county was crying off from a challenge, what indeed would be the point of it all. Harte has always been bullish about his sides’ chances and sees a time when the tide will turn.

“We didn’t think it would last this long, as long as it has. We probably thought that they would falter somewhere in the last four years,” he said.

“So, maybe it is wishful thinking, but we would like to see it change. Everything does change eventually and it only takes one break. It’s not to say that somebody would break Dublin’s grip on the thing, that they would be gone, but at least it gives someone else a chance to enjoy the glory of the moment and even if Dublin come back a year later, at least there would be a break in transmission, of ruling the roost.”

There is a feeling out there that because of their excellence, it can be linked to falling crowd attendances. Again, don’t expect the Errigal Ciarán clubman to go with the flow on that issue.

“I think we can’t bring those things together; the decline in attendances just because Dublin are so good. I mean, what about the fact there is so much football on television now? Why would people get off their armchair when they can see it all and the analysis and replays and everything else in their own front room?” he asked.

“And there are lots games that Dublin are not involved in and I think there are decent crowds going to matches. People seem to forget that back in the day you might have seen highlights of an Ulster final if you were lucky and before that, you only saw televised games in the All-Ireland final and semi-finals.

“Back then, there wasn’t wonderful crowds going either. I saw All-Ireland semi-finals where there wasn’t 25,000 at it.”