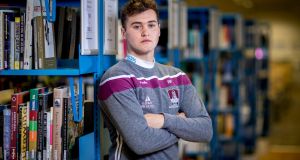 Robert Finnerty: “I’ve enough of the bench now, I’ve spent enough time there so hopefully now I can get into the team.” Photograph: Morgan Treacy/Inpho

Perhaps it’s just as well the Sigerson Cup begins on the same day that Pádraic Joyce takes his first steps as Galway manager, against Mayo.

Sunday’s FBD Connacht League semi-final is a game Robert Finnerty would have been pushing hard to play in for Galway but the son of Mayo legend, Anthony, will instead be on duty for NUI Galway.

It’ll save former Mayo forward Anthony the difficulty of deciding exactly who to shout for; his son or his county.

“Obviously if it’s a case that Mayo are playing someone other than Galway then he’d support them but I’d like to think he’s a Galway man when I’m playing with Galway.”

Those loyalties will probably be tested come summer with Finnerty the younger determined to nail down a regular place and new manager Joyce talking about going deep into the championship. As things stand, the counties are on a Connacht final collision course and will also meet on March 15th in the Allianz League.

Joyce, who won his first All-Ireland in 1998, the year former Galway minor and under-21 star Finnerty was born, didn’t waste any time in stating he’s on the trail of Sam Maguire after taking over from Kevin Walsh.

“That’s what he wants, yeah, that is the aim for every county really, it’s the big one, it’s what you want,” said Finnerty who was speaking at the launch of the 2020 Electric Ireland Fitzgibbon, Sigerson and Higher Education championships.

“It’s an exciting appointment, especially for myself as a forward. I would have watched Pádraic, it’s going to be great to learn from him.

“I think it’s just trying to build on the last few years really. Galway got to an All-Ireland semi-final two years ago, gave it a good go against Dublin. It’s really just trying to go a step further and win it out, try to win Sam. Bring it back to Galway.”

The championship, Finnerty noted, seems a long way off now though with the Salthill man setting himself the personal target of nailing down a spot during the league.

He played twice in last year’s championship, making his debut against London in Ruislip, having first played in the 2018 FBD League.

“I’ve enough of the bench now, I’ve spent enough time there so hopefully now I can get into the team,” said the 2017 All-Ireland under-21 finalist.

Finnerty will be on Sigerson duty for NUI Galway on Sunday with the 2018 finalists handed the stiffest challenge possible in Sunday’s knock-out opener, against holders UCC.

“We were kind of under the impression that we got so far in the league that we were going to get a nice enough draw,” said Finnerty. “Then we ended up drawing last year’s winners!”