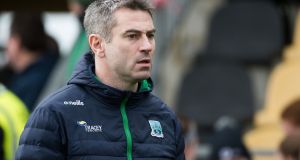 Rory Gallagher’s Fermanagh had too much for Clare on Sunday. Photograph: Evan Logan/Inpho

Many experts made Fermanagh favourites to go down and now they are only one win away from going back up to Division One for the first time since 2007.

This was a thoroughly deserved win for Rory Gallagher’s men as a strong third quarter was the basis for this important victory that assures them of Division 2 football next year.

Fermanagh just about deserved their narrow 0-7 to 0-6 half-time lead after a half where they were denied a certain goal by the brilliance of Clare keeper Pierce De Loughrey, who turned Ryan Lyons point-blank shot around the post.

They had a bright start and moved into a 0-2 to 0-0 lead through points from Sean Quigley and Declan McCusker.

It took Clare 11 minutes to get off the mark and they did so through the impressive Kieran Malone and Conor Finucane.

That set the pattern for a tense first half where the sides were level on four occasions.

But the winners moved up a few gears in the third quarter and points from Sean Quigley and Declan McCusker gave them a two points advantage.

This was followed by a superb effort from the busy Ciaran Corrigan with the outside of the boot.

But Clare will rue the departure of Jamie Malone to a black card ten minutes from time in a carbon copy of what happened to Donegal last week.

Clare threw Gary Brennan on the edge of square but they hit six wides as the well- organised Fermanagh defence held firm.