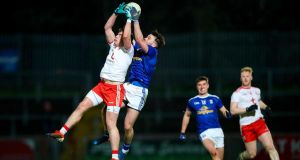 Peter Harte’s second half strike put an end to Cavan’s brief Division One revival and pushed them closer to relegation.

Playing with 14 men for almost the entire second half, the Breffni side trailed from the early stages and never looked like overturning an improving Tyrone side.

Five points from their last three games have lifted the Red Hands out of the drop zone, and manager Mickey Harte declared himself satisfied with progress on attacking strategies.

“We are happy enough, I suppose we are creating chances. We think we could have taken more of them but that’s how it is,” said Harte.

“You always have to be happy with a team that creates chances even if you weren’t getting as many as you would like.

Cavan defended with discipline as they faced a strong breeze in the opening half, and a four points interval deficit saw them perfectly poised to take the game to the home side on the resumption, before the game-plan came apart with the dismissal of the experienced Killian Clarke.

They took the lead with a Jack Brady free, but failed to score for almost 20 minutes, during which time the Red Hands hit five points on the spin, two of them frees off the trusted right boot of the returning Connor McAliskey, making his first start of the season following a lengthy lay-off with a dislocated ankle.

Cavan struggled to break down a well organised Tyrone defence as the home side dropped numbers back and raided at pace on the counter-attack, and didn’t manage their first point from play until stoppage time, when Dara McVeety arrowed over a brilliant effort.

But a couple of Harte frees and a tidy second point from Niall Sludden saw Tyrone pull clear late on, and they led by 0-8 to 0-4 at the break.

Clarke’s second booking two minutes after the restart ended any hope of a second-straight win for Mickey Graham’s side, and when substitute Darren McCurry sent Harte in to plant a low shot in the bottom corner of Raymond Galligan’s net on 50 minutes, there was only going to be one outcome.

A brilliant Kyle Coney score was followed by the first of two points from corner back Hugh Pat McGeary, and last year’s beaten All-Ireland finalists led by 10.

Cian Mackey came off the bench to freshen up the Cavan attack and probe for openings that eventually began to appear, but much too late.

Mackey converted a couple of frees and rounded off an enterprising move with a point, but his side managed just two from play in the entire game.

Owen Doyle: Culture of ‘clip memory’ among modern referees not cutting it on the pitch 13:30
European Indoors: Sarah Lavin and Sean Tobin clock lifetime bests to advance 13:20
Lions tour will not take place in Australia this summer 11:39
England all in a spin once again as India seal the series 11:00
The story behind the amazing growth of women’s Gaelic football 10:12
Crossword Get access to over 6,000 interactive crosswords