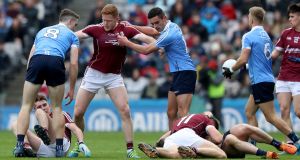 A quick summation of where Gaelic football is right now. Dublin polished off their fifth league title in six years with a 0-18 to 0-14 win over Galway here. They did so despite having to play out the closing 25 minutes with 14 men after Niall Scully picked up a second yellow card. By the end, the 14 players they had on the pitch contained only eight of the side that started last September’s All-Ireland final.

Nonetheless, they outscored Galway by 0-5 to 0-1 from the hour-mark onwards, doing the winning when the winning was there to be done. They did all that despite all that and still most people left the stadium pencilling Galway in as a possible player in the summer’s business on account of the jolly good show they put up. Truly optimism is a disease with no known cure.

On another perishing spring-in-name-only day at Croke Park, 36,574 sets of teeth chattered in the stands as Dublin took the Division One title a couple of hours after Roscommon picked up the silverware in Division Two. Kevin McStay’s side came through a bafflingly entertaining curtain-raiser with a 4-16 to 4-12 win over Cavan, driving home their recent bossing of that fixture.

For Jim Gavin, this is the 14th trophy of his 5½-year reign. That’s 14 out of 16 for anyone keeping score. When everything was in the melting pot here in the closing quarter-hour, the list of players he didn’t have on the pitch would make most county managers consider spending more time at home.

Cian O’Sullivan and Jack McCaffrey were missing from their first-choice defence alone, while James McCarthy went off injured in the first half. John Small missed a big chunk of the game with a first-half head injury. Michael Darragh Macauley went off hurt in the second half. Paddy Andrews, Eoghan O’Gara, Bernard Brogan and Diarmuid Connolly weren’t on the panel. And still Dublin had a bit in hand when it mattered most. No wonder Gavin was happy with his lot afterwards.

“We controlled the game, we played it on our terms which is what we try to do in all the games we play. Defensively we were very solid to limit Galway to six scores in the second-half – especially after the wind picked up because it felt like that on the touchline.

“We got that bit right in our game. We played with great intent and we drove hard and went at them. There was a lot of unselfish work today by the Dublin players, picking up Galway runners. A lot of breaking ball was won, really unselfish work and great hunger shown by the players.

“When the game was there to be won by either team I really thought the Dublin guys stepped up. That is what I find remarkable about them that they can do that on such a consistent level, especially because they have achieved so much in the past. That is very pleasing from the management and back-room perspective.”

Gavin had updates to pass on regarding a couple of those absentees. O’Sullivan will be back in time for the summer. McCaffrey is making a fairly speedy recovery from the cruciate injury he picked up in the All-Ireland final and is back “training on grass”. And as for Connolly, we’re not an awful lot the wiser but Gavin did at least address the question in a more meaningful manner than before.

“His status at the moment is that both Diarmuid and I agreed that what was best was that he would take a rest over these games,” Gavin said. “He has had a long number of years playing senior inter-county football, as have a lot of this group, and that decision was made in his best interests.”

Will he be back for championship?

Galway’s performance was encouraging, even if they never quite managed to nose themselves ahead with the extra man. Damien Comer put in a bravura display, Shane Walsh showed some flashes, midfielder Peter Cooke covered countless acres and goalkeeper Ruairi Lavelle made a couple of blinding saves. But in general, in was the flinty nature of their afternoon that sent them back west quietly satisfied with their efforts. Dublin don’t often have it served up to them this raw.

“Disappointed with the result,” was Kevin Walsh’s reaction. “But taking everything into account, it was a great learning curve for the team. It was important we were there coming up the stretch.

“A bit disappointed to give away a few late points but it was good for us overall. I think five of those lads didn’t kick a championship ball yet so it was important for us to see how they would react at headquarters.”