Down to 14 men, Jim Gavin’s team needed all its experience to clinch a 13th league title 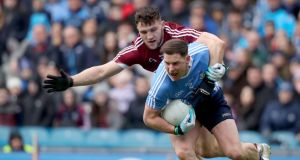 The bare bones of it were that Dublin made it five Allianz Football League titles out of six years of reaching the final under Jim Gavin’s management and a 13th in all. Their experience and unwavering belief in themselves account for a good deal of the difference between the winners and a serious-looking Galway team that stayed within one point until the final five minutes.

They were, though, playing just 14 men for the final quarter after Niall Scully’s dismissal for a second yellow card in the 50th minute. Nonetheless, the sense from Galway manager Kevin Walsh was that whereas the season’s finale had been a disappointment, it hadn’t in any way qualified a hugely encouraging campaign back in Division One.

Dublin’s ability to string scores together and control possession at vital stages kicked in during the closing minutes during which defenders Philip McMahon and Eric Lowndes broke forward for points and with the last attack of the match, the ultra-composed Dean Rock tapped over a free for his seventh point of the day to seal the victory.

The manner in which Dublin win matches is founded on patience. They happily play keep-ball and probe for openings and space to score but track back when that possession is lost and concentrate on the other end of the pitch.

On Sunday they weren’t always perfect in the execution of this and at times Galway even did it better, but over the 70 minutes of a match – if you’re not constantly vigilant – Dublin will take you for rapid-fire scoring sequences.

To the Connacht side’s credit it didn’t happen too often – notably for about 90 seconds in the 44th and 45th minutes when careless restarts helped Dublin to reel off three points and at the very end – but it was enough to hand the winners the upper hand.

The match’s narrative might have been different had Paul Mannion’s jet-heeled thrust through the Galway defence within five seconds of the throw-in ended up with a goal rather than a good block by Ruairí Lavelle but instead the cautious tit-for-tat exchanges commenced.

Dublin’s early two-point lead was built on Mannion atoning for his miss. Firstly he turned over ball in his own defence and started a move that was finished by Rock, and a minute later shot one of his own.

If Galway were intimidated by the often dusty fate to which Dublin have consigned league final opponents in recent years, they didn’t show it. Their defence competed well and didn’t give up easy chances.

In attack Damien Comer added to the credentials of an already impressive season. His bustling style on the ball and the obvious threat he poses as a scorer spooked Dublin. Three different players brought him down in the first 20 minutes – and although there was a hint of black card about at least one of the fouls, only McMahon, who got a yellow, was cautioned; Scully and Jonny Cooper escaped sanction – and Barry McHugh kicked the frees with the efficiency he’s been showing all through the campaign.

Galway ended the first half strongly, snuffing out the two-point deficit, as Paul Conroy sidestepped through for a score and wing forward Johnny Heaney clipped his second off the post to tie it at 0-8 each. More troubling for Dublin was the sight of James McCarthy hobbling ashore in injury-time.

For the second half, Colm Basquel came on for the subdued Kevin McManamon and made his mark immediately by finishing a move featuring Mannion and Scully. Rock, Mannion and Basquel fired the three-point volley to put them 0-12 to 0-9 ahead but Galway’s response was excellent.

Shane Walsh whose pace and accuracy was a big threat, curled over an excellent point from a free in the 54th minute and after McHugh had punished Scully’s red card, Walsh added another cracking point to equalise. It wasn’t just clinical shooting; Cathal Sweeney made a tenacious block on Basquel during the 10-minute spell during which Galway got back into it.

Even with 14 men, though, Dublin looked to have the craft and composure to see the job through even if their opponents’ refusal to see the contest in those terms must have been disconcerting.

For much of the final Ciarán Duggan had played a combative part in the centrefield contest but Fenton became more of an influence as the match wore on, getting on the ball and threading moves together.

As Dublin raised the tempo, one such move swept in on the Hill goal but Rock’s shot at the end was again saved by Lavelle who tipped it behind – Rock’s value to the All-Ireland champions again underlined by an unerringly accurate 45 to restore the lead, at 0-14 to 0-13.

Another sweeping move set up Kilkenny for another score and although Comer mustered another terrific point from about 30 metres Dublin’s end-game was too strong even if at 0-16 to 0-14 it still required a great tackle by rookie replacement Eoin Murchan to prevent Seán Kelly getting in for a shot on goal.