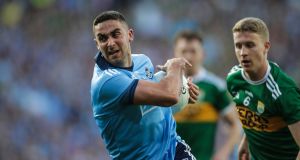 James McCarthy mentions the symmetry of it. On Saturday he and Dublin will face Meath in the resumed football league at Parnell Park. It takes him back more than 10 years to what was only his second appearance for the county, in the days when home matches were played in Donnycarney.

“I remember playing against Monaghan one time here. Look, it will be nice. I think lads are looking forward to playing here again. Obviously there’s going to be nobody here, but it’s a nice little ground. It’s a nice little atmosphere to it. It’s nice to go full circle on it.

“Yeah, it is a change in the dressingroom. I remember looking at team photos at ’11 and ’13 and ’15. It’s crazy how much the team changes as the years go by.”

McCarthy, with seven All-Ireland medals after the most memorable decade in Dublin football, was in the venue on Thursday to promote the launch of Dublin’s new playing kit by main sponsor AIG.

There’s little doubt that 2020 will be the strangest of his 10 championships. Delayed until November, it brings a change to the high tempo of summer.

“It does change the dynamic of the game. It probably makes it more physical now and slightly slower pace. So it will change it to a degree.”

This summer, McCarthy won a second county championship with Ballymun, and the inversion of club and county seasons proved very successful. Now he faces into a season which could see Dublin extend its five-in-a-row record.

“The five in a row is done and dusted but we’ve kind of parked it. It’s a new year now. We’ve always parked our previous achievements and there’s so many new guys around the changing room now as well.

“It’s just a different type of championship, a different feel. It’s going to be straight knockout. I’d be a big fan of that. That all adds to the bit of excitement around the place.”

Dublin’s first match in the championship against Westmeath has been announced for Portlaoise, a familiar venue, but McCarthy is surprised in the circumstances of “behind closed doors” that Dublin’s opponents simply weren’t allowed home advantage.

“Yeah look, we played there before. It’ll be fine – it is what it is – but it probably makes more sense to play it in Cusack Park in Westmeath and I don’t know why they’re not doing that, it doesn’t make much sense.”

This year there have been more retirements from the pioneering team he joined, notably those of Bernard Brogan and Diarmuid Connolly, but he’s not ready to join them yet.

“Once you’re enjoying it, you get the buzz going to training and the buzz playing matches, why not keep going as long as you can? You’ll be finished long enough, so that’s my attitude to it.”