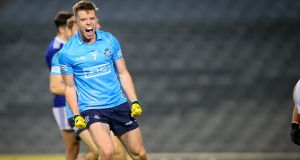 The last thing Dessie Farrell can be accused of is favouritism when it comes to Robbie McDaid, arguably Dublin’s big new find of 2020, not when his breakthrough to the senior team this season has been five years in the making, and not the least bit serendipitous.

Farrell also knows as well as anyone how far McDaid has come to wear the number seven jersey, effectively taking it over from Jack McCaffrey: McDaid was full back and captain of the Dublin minor team, managed by Farrell, that lost their 2011 All-Ireland final to Tipperary.

Three years later McDaid won an Under-21 All-Ireland with Dublin, that team also managed by Farrell, and captained by McCaffrey. On that back of that, in 2015, he was brought into the Dublin senior panel by Jim Gavin, along with fellow under-21 graduate Brian Fenton, only McDaid’s impact was stalled when he was forced to sit out almost three months due to concussion.

A year later McDaid won a Sigerson Cup with UCD and a first ever All-Ireland club title for Ballyboden St Enda’s, and at that stage his breakthrough into the starting team appeared imminent. Instead, it was another three years away.

Then, in what might be considered among his last influences as Dublin manager, Gavin gave starting places to McDaid, Paddy Small and Seán Bugler in their final Super-8s game against Tyrone in 2019, at which stage Dublin’s semi-final berth was secured.

All three rose to the occasion, although only Small saw any more game time in 2019, coming off the bench in the drawn final against Kerry.

Now, under Farrell, all three started for Dublin in their semi-final win against Cavan, Small showing once again why he’s holding down the number 13 shirt ahead of Paul Mannion (finishing with two points), although Bugler had a quieter night, unable to add to his 2-4 to date.

In finishing with 1-2 – including his first ever championship goal – McDaid earned himself some extra praise and the man-of-the-match award, and now aged 27, his five-year wait for that proper breakthrough is over.

Cian O’Sullivan is one of the Dublin players, to in part at least, lose a place in the Dublin half-back line as a result of McDaid now making the position his own, but still he has nothing but high praise for the Ballyboden player, and particularly his patience.

“Jack McCaffrey is an exceptional player but when you see the likes of Robbie McDaid coming in there and doing a job, it’s really, really satisfying,” says O’Sullivan.

“It’s not a case of this is Robbie’s first year on the panel, he’s been there for the last number of years, part of a very successful Ballyboden team and he’s been involved in the squad for a while. He probably just hasn’t had his opportunity, through a combination of Jack playing in that position and then getting injuries possibly at the wrong time.

“Now he’s just improving game on game and he’s one of the marquee guys for Ballyboden over the last number of years. In terms of the senior team he’s probably had injuries at the wrong times, when you’re trying to break into the team and that, it probably stuttered his breakthrough but it’s great to see him get what he deserves and to see the past number of performances.”

It continues a trend too, from Eoin Murchan last year, or Davy Byrne, or Brian Howard, and started by Ciarán Kilkenny’s own breakthrough season in 2013; only how safely that breakthrough can continue O’Sullivan isn’t sure.