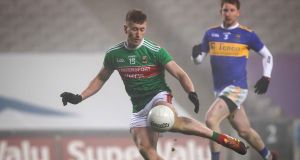 Cillian O’Connor scores Mayo’s fifth goal, and his own fourth, in the semi-final victory over Tipperary at Croke Park. Photograph: Morgan Treacy/Inpho

Cillian O’Connor’s return to top form was vividly underlined in the All-Ireland semi-final when he set a new all-time scoring record of 4-9 for the football championship.

If anyone was going to do it, it was probably the Ballintubber forward, who has topped the championship scoring charts four times in the past 10 years and is all but certain to make it five after the weekend’s All-Ireland final.

So what has brought about what many believe is the best form of his career?

His predatory instincts were on full view two weeks ago, nowhere more visibly than in the third goal against Tipperary when he exploited the tiniest inaccuracy in Liam Casey’s return pass to his goalkeeper to nip in and fist the ball into the net.

He was asked had he studied the opponents’ exit strategies to identify that this might happen.

“It’s not necessarily something we had identified with them but in the modern game there’s lots of ball-playing corner backs and full-backs and goalkeepers and a lot of people who are comfortable on the ball like that, so you do expect some passes to be played around that area.

“Tommy [Conroy, Mayo corner forward] turns the guy back and puts pressure on him. The out ball was closed off by the half-back line pushing up, so I thought the only player free was Evan [Comerford, Tipp goalkeeper] and then I needed the pass to be a little bit miscued to have any chance and just by pure luck, it was and that’s how it ended up.

“But again, it was Tommy and Aidan [O’Shea] . I was the player that had the least to do with it to be honest. I was the furthest away, so they did brilliant for it.”

Behind the modesty of this account lies a truth. The Mayo full-forward line this year has benefitted from reconfiguration with captain, Aidan O’Shea, spending more time on the inside line where his ball winning and ball handling have been significant additions.

Conroy has emerged in his rookie year as a new type of threat, a tricky, fast corner forward. O’Connor’s scoring talents have been a beneficiary as has the team, back in the big time three years after their last final.

It has undoubtedly helped him that the lockdown and much-delayed championship allowed a good deal of physical and mental rest for a player, who although just 28 is in his 10th All-Ireland season.

He has been troubled with injuries on and off and this year a knee injury from the tail-end of 2019 kept him out of intercounty football in the early part of the year – he was just about to return for the Galway match when everything shut down and he calculates that he was 14 months out of the Mayo jersey by the time the league resumed last October.

Returning after a lay-off is always tricky.

“The big challenge then is when you’re back and when you’re playing and you’ve been cleared to play but you know you don’t have a bank of three months of training and you know, ‘right, I might be at a certain level here but if I’m putting my hand up for selection, I’m going to be judged and rightly so, as if I’m 100 per cent. I’m going to be asked to do jobs for the team that require a really high level'.

“You have the dynamic of your coming on ahead of them or getting selected ahead of them. It can be difficult to manage that as well. It’s nice to have a clean slate and not to have those thoughts in your head the week of a game.”

Another factor in his striking form is that manager James Horan brought in one of the county’s biggest names to help with the forwards. According to O’Connor, Ciarán McDonald has been a great assistance.

“Firstly he brings a sense of fun and a bit of crack and just a real enthusiasm for the game. It’s all about kicking the ball; it’s all about having fun; it’s all about taking on shots and taking on your man. There’s nothing cautious or careful – it’s just kick the ball, move the ball, play and have fun and play with a smile.

“That’s infectious first of all and then I think being progressive, getting your head up and moving it on and taking in the play, a solo and bounce out of it.

“He’s a forwards man, he’s a footballer and it’s great to have another voice like that around because he will see things that will resonate with us that might not get a mention otherwise. So I think just his forward movement and patterns of play in the front six, small little conversations with him around training before and after can be gold.”

Cillian O’Connor won’t be caught at the top of the scoring charts, as he’s 21 ahead of Dean Rock, Dublin’s only candidate but that’s hardly his priority, as he eyes up the biggest prize in football.