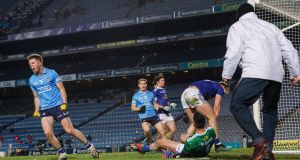 The man comes around. Or perhaps in this pandemic winter, it’s the men coming around that continue to put the Dublin footballers in a height and weight class of their own. No turning back now either, just another All-Ireland final to come, this night two weeks.

To the end-game first. The scoreboard was promptly enough cleared in Croke Park on Saturday night, which is a good thing, because even in the empty stadium no one needed to dwell any longer on the damage Dublin had just inflicted on their latest victims Cavan. No disrespect, no fear, no contest.

Their 1-24, 15-point winning margin, brings to 6-90 their score in the four games that’s taken them into a sixth successive All-Ireland, seeking another record of a sixth All-Ireland; they’ve also won those four matches by a combined total of 69 points, without conceding a single goal.

If much of the night belonged again to players like the irrepressible Brian Fenton, the ever-consistent Dean Rock and Con O’Callaghan, and the ever-dependable Ciarán Kilkenny, in its own way it belonged to Robbie McDaid.

In what might be considered among his closing acts as Dublin manager last year, Jim Gavin gave starting places to McDaid, Paddy Small and Seán Bugler in their final Super-8s game against Tyrone, at which stage Dublin’s semi-final berth was secured. All three rose to the occasion, although only Small saw any more game time in 2019, coming off the bench in the drawn final against Kerry.

All three started here against Cavan, Small showing once again why he’s holding down the number 13 shirt ahead of Paul Mannion, finishing with two points, and while Bugler had a quieter night, unable to add to his 2-4 to date, he did plenty of foraging and set up a couple of scores too.

In finishing with 1-2 – including his first ever championship goal – McDaid earned himself some extra praise and the man-of-the-match award, the Ballyboden St Enda’s player also looking at his most comfortable yet in the number seven jersey which last year was worn by Jack McCaffrey.

It’s these new men that keep coming around – from Eoin Murchan last year, or Davy Byrne, or Brian Howard, continuing the trend started by Kilkenny’s own breakthrough season in 2013 – that now seem as much a given as the Dublin score.

McDaid displayed his appetite and attitude early on; after seven minutes, Cavan are beginning to feel the brunt of the Dublin turnover, the ball worked through the lines to McDaid, who easily points off his right foot, as Dublin take the lead for the first time.

His second point arrives in the second half, on 56 minutes to be exact, and again comes off the back of a Dublin turnover, Raymond Galligan’s kick-out won back immediately by Dublin via Fenton, who then passed off to McDaid who simply tapped the ball over the bar from his close range.

Then his goal, with three minutes of normal time remaining, when he simply couldn’t miss. Dublin may have gone the night without truly hunting for a goal – although seconds earlier Philly McMahon dragged his clearcut shot wide; when Dublin won the back ball again, Rock timed his run at goal with percussion precision, dropping it into McDaid’s path so perfectly that all he needed to do was palm it into the net. In the end, Dublin scored 1-18 from a turnover of some sort.

In the end too, McDaid enjoyed 38 possessions, not quite in Fenton’s territory, but matching his work rate no less: “We do pride ourselves on our work rate, from one to 15,” he said. “And the boys coming in, we always chase down the ball, like to go after tackles. That’s one of our big targets, we’re hungry for it, enjoy doing it.”

“It’s nice to be getting a bit of game time. But serious competition, I’ll just have to keep on my toes, keep pushing. I’ve been very lucky with underage and club success, and that gives great exposure to levels around the country, and the standard you need to get to. I’d like to think that’s all money in the bank.”

Dublin manager Dessie Farrell confirmed afterwards that rumours of McCaffrey returning to the panel were exactly that, pure rumour; McDaid is now sure to keep that number seven jersey for the final, nine years after he last captained the Dublin minor team, from full back, that lost to Tipperary.

Afterwards Mickey Graham admitted Cavan had met “far superior opposition”, Dublin being “very, very impressive” and the only hope is “we will look at the standard they have set, and try and go about getting up to those standard.” Graham also noted: “People talk about their players, and their quality and skill set, but what impressed me was their work ethic.”

Which simply keeps coming around in men like Robbie McDaid.