Offaly errors and discipline cost them as Kildare cruise through

There were O’Byrne Cup wins on Sunday for Louth, Longford, DIT, Westmeath and DCU 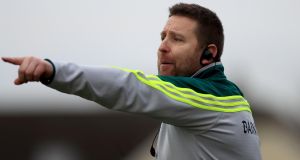 An impressive first half display saw Kildare comfortably book their place in the semi-finals of the O’Byrne Cup in Tullamore on Sunday.

Offaly competed well early on and were level at 0-2 each after 12 minutes but the game changed when corner forward Nigel Dunne received a straight red card.

Goals from Niall Kelly and Eoin Doyle saw Kildare take complete control as Offaly fell to pieces. While Kildare played well in the first half and dictated the pace of play after the sending off, they were assisted by a huge volume of errors and poor passing by the home side.

Kildare led by 2-8 to 0-2 at half time as Offaly went from the third to the 38th minute without scoring.

Offaly did improve in the second half as they cut down on those basic mistakes but Kildare were never in the slightest danger of losing. A very harsh straight red card for Kildare wing back, Shea Ryan evened up the numbers before a 48th minute goal from Tommy Moolick after a misplaced Alan Mulhall short kickout made it 3-8 to 0-6.

Offaly replacement goalkeeper Barry Rohan made a couple of good saves as the game petered out to a tame end with Kildare operating in a comfort zone.

Defender Anthony Williams booked a northeast derby date for 14-man Louth with a last-gasp goal against Carlow on Sunday.

The hosts needed to avoid defeat in Dundalk to set up a showdown with old rivals Meath in the O’Byrne Cup semi-final.

They started brightly but a straight red card for Kurt Murphy, and a John Murphy penalty a minute later, gave Carlow real hope of causing an upset.

The visitors adjourned with a 1-6 to 0-7 lead and although Conall McKeever struck shortly after the break to edge Louth back in front, a Darragh Foley goal at the other end kept Carlow’s noses in front.

Turlough O’Brien’s players looked to be hanging on for the victory, but with injury-time just underway substitute ‘keeper Robbie Molloy spilled a Derek Maguire up-and-under into the path of Williams, who made no mistake from the edge of the square.

As Carlow pressed for a game-winning goal, Ger McSorley broke clear deep in injury-time to add a third goal and make it completely certain for Louth.

A much changed Longford side had eight points to spare against IT Carlow in their final O‘Byrne Cup group game on Sunday. It was a meaningless fixture for both sides, in terms of the competition, and the football on show at times reflected exactly such.

Six of the goals were scored in the first half as Longford took a 4-4 to 2-5 lead going in at the half-time break.

It was IT Carlow who opened the scoring in the fourth minute with a pointed free from Longford Under-21 player Cathal McCabe.

Longford‘s first score was a goal from Ronan McEntire in the sixth minute. They were ahead by four in the ninth minute but IT Carlow cut that to just one in the 15th minute with a goal of their own from Conor O‘Toole.

Longford were awarded then a penalty in the 21st minute, which was easily dispatched by Donie McElligott. Liam Sullivan and Gary Rogers added further goals before IT Carlow grabbed their second goal just before in the break.

Substitute Robbie Smyth hit over early points in the second half before Darren Gallagher raised the fifth green flag for Longford.

Credit to the Carlow students they kept at it, and scored a third goal in the 51st minute through substitute Gearoid Hanrahan.

Nonetheless Longford went on and extended their lead to 11 points in the 65th minute, but right at the end McCabe tucked away a penalty to score his resilient side‘s fourth goal of the afternoon. And the ninth of the game.

DIT finished the stronger in the final quarter to see off Wicklow, and end their O’Byrne Cup involvement with a win.

The students had four points on the board before Wicklow registered their first score in the 17th minute, and Killian O’Gara’s goal gave them a 1-4 to two point lead after half an hour. However a fortunate Seanie Furlong goal gave Wicklow a lifeline and there was only a point between the teams at half time.

Wicklow led early on in the second half but DIT’s final flourish was enough to come away victorious.

Westmeath overcame a very lacklustre first-half display to eventually see off Maynooth University with a six point victory in this O’Byrne Cup clash in Athlone.

It wasn’t enough however to earn Westmeath a place in the semi-finals as Louth progressed to the last four thanks to their win over Carlow.

John Heslin scored 1-9 in the second half alone, and a total of 1-11, with substitute Callum McCormack scoring Westmeath’s second goal. Many of Heslin’s points were of the highest quality, and it was his pass which set up McCormack for his goal.

With the excellent Ryan O’Rourke (Leitrim) netting two goals, a lively Maynooth University side had led 2-7 to 0-7 at half-time.

Westmeath showed greater intensity and workrate in the second period though - and despite Henry Walsh of Roscommon scoring Maynooth’s third goal from a penalty, the home side would not be denied.

John Doyle’s Maynooth side created several goalscoring chances over the course of the game, in addition to the three opportunities they converted, but Heslin’s scoring prowess ultimately proved the decisive factor.

UCD’s O’Byrne Cup campaign came to an end at Belfield on Sunday when they suffered a six-point defeat to college rivals DCU in their final group game.

Following their victory over All-Ireland champions Dublin last Wednesday evening, UCD were in pole position to qualify for the semi-finals - and a 24th-minute goal from corner-forward Eoin Lowry helped them to develop a 1-5 to 0-7 interval advantage.

However, Niall Moyna’s DCU were eager to make amends for previous defeats in the competition to Dublin and Wexford, and thanks to strong second-half showings from Niall Murphy, Shane Carthy and Mayo star Patrick Durcan, they secured a morale-boosting victory. And early season bragging rights ahead of the Sigerson Cup.

1 Sports nerd heaven: Irish elite logging on for Analytica Zoom part two
2 Gerry Thornley: Home and away Six Nations could be its ruination
3 Argentina rugby great Hugo Porta continues to give back to his beloved game
4 Liverpool among clubs to argue against paying €384m TV rebate
5 Ken Early: Liverpool fans, Bamber Gascoigne and a close shave in Istanbul
Real news has value SUBSCRIBE