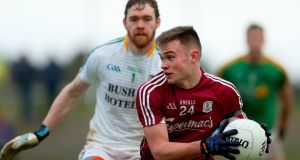 A shellshocked Leitrim failed to recover from a three goal Galway blitz in as many minutes at the beginning of this one-sided encounter at Ballinamore on Sunday.

A high ball, straight from the throw in, hit off the Leitrim upright into the waiting arms of Danny Cummins who promptly finished to the Leitrim net. Precedent set.

This was followed up with a second from Killian McDaid, before another from Paul Conway all but ended the game as a contest one minute later.

Brendan Gallagher’s opening point from play in the eighth minute was Leitrim’s last until 10 minutes from the interval - as a pacy, well organised Galway dominated in all sectors scoring almost at will with the impressive Barry McHugh leading the line for the Tribesmen and emerging as their top scorer.

A Gary Plunkett point from play and two Emlyn Mulligan pointed frees ended a demoralising first half for the hosts but the second period brought no redemption.

Leading 3-14 to 0-4 at the break ,Galway continued to pile on the agony against a disjointed Leitrim side with three early unanswered points and any hopes of a revival were snuffed out with two more Galway goals by Killian McDaid in the 48th minute and Sean Armstrong ten minutes later to round off a miserable afternoon for the hosts.

IT Sligo bounced back from their hammering at the hands of Roscommon last week to give Mayo a competitive game in this second round Connacht League tie at James Stephens Park, Ballina.

Mayo manager Stephen Rochford was looking for a response too after losing the first round to NUIG, by calling back a number of his more established players, and it looked to be working when they opened up a nine point gap at one stage in the second half (1-17 to 0-8).

But an inspired performance from James Shaughnessey for the students saw the Claremorris player nail 1-8 as the visitors hit six unanswered points in the second half.

With the lead down to just three points it took three late scores from substitutes James Durcan and Cian Costello, along with a superb effort from the impressive Fergal Boland, to settle Mayo nerves and secure their first win of 2017.

Shaughnessey struck from the penalty spot in the first half to put IT Sligo on level terms but a fine goal from Alan Freeman, who finished himslef with 1-7, saw Mayo take a commanding 1-12 to 1- 6 lead at the break.

Cillian O’Connor and Donal Vaughan were drafted in for the second half, Vaughan ending up with a black card followed by a straight red deep into injury time for what appeared to be dissent.

Roscommon have one foot in the FBD League final for the third year in succession following a deserved six-point victory against NUI Galway at Ballyforan.

Shane Killoran’s injury-time goal helped the home side, who also kicked 15 wides, over the finishing line.

Kevin McStay’s side were 0-11 to 0-6 ahead at the break, thanks to some fine scores from Niall Kilroy, Donie Smith, Cian Connolly, Conor Devaney, Kevin Higgins and Seán McDermott.

Michael Daly and Owen Gallagher were excellent for the Galway students, firing over seven fine efforts from play between them.

Roscommon weren’t as fluent after the break but they always managed to keep their noses in front. Full-forward Kieran Kilcline landed two scores inside a minute before Killoran’s three-pointer sealed the deal in the 72nd minute.

Stephen Coen scored a second-half hat-trick as Sligo hammered GMIT 5-24 to 0-1 in the FBD League at the Connacht Centre of Excellence in Bekan.

Sligo had the breeze in the first-half and Brian Egan scored their opening goal as they raced into a commanding 1-11 to 0-1 half-time lead.

The students were hammered 3-17 to 1-7 by Leitrim in Round One, and despite the aid of the elements in the second-half it was much of the same as Sligo continued to totally dominate proceedings.

The returning Coen raised his personal tally to 3-4, and Criostoir Davey scored the other goal for the rampant county side.