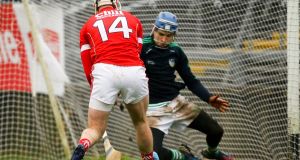 A goal blitz by Cork helped them to a whopping 21 points win over Limerick at the Gaelic Grounds before an attendance of 1,625 on Sunday.

Limerick managed a third minute goal by Barry Nash but the Cork forwards - mainly through the efforts of Alan Cadogan - built up a 3-12 to 1-9 interval lead.

Cadogan scored 1-4 in all, but also created three of his team’s other goals.

Patrick Horgan and Shane Kingston led the goal rush with two each (Horgan also had five points, three from frees) - but it was Luke Meade who had Cork’s first goal after seven minutes.

Cadogan then beat Barry Hennessy after 15 minutes and Kingston had the first of his goals five minutes before the break.

By that stage it was as good as over for Limerick whose top scorer was Ronan Lynch with eleven points, eight of them from frees.

They will however be happy to have welcomed back James Ryan for the second half, and he was one of four substitutes to score.

Clare’s new management duo of Donal Moloney and Gerry O’Connor got off to a winning start against an improving Kerry side at Austin Stack Park Tralee on Sunday afternoon.

Kerry, who were playing their first home game under new manager Fintan O’Connor in this Munster Senior Hurling League encounter, were difficult to break down in the opening half and the sides were locked on at 0-10 apiece five minutes before the interval.

However Clare midfielder Kevin Hehir would hit 1-1, followed by a fourth free from the unerring David Reidy - and so the visitors retired 1-12 to 0-11 ahead.

Kerry fought for every ball and 0-5 from Shane Nolan placed balls, and points from Pa Kelly (playing against his former former team-mates), Paudie O’Connor, Podge Boyle, John Egan and two from Jordan Conway had Kerry well in the contest.

But Clare, with Podge Collins scoring their second goal in the 56th minute, took control in the second half.

Nonetheless a Mikey Boyle solo goal for the Kingdom left just five points between the sides with ten minutes left.

Clare’s superior skill and fitness told though as Kerry tired and were outscored 0-8 to 0-1 in that final period.

During which David Reidy brought his tally to 0-10, and substitute Peter Duggan even had the luxury of blazing a penalty over the bar. Kerry can also thank their goalkeeper Martin Stackpoole for some outstanding saves, denying Aaron Shanagher two certain goals with point blank saves.

Mason Jones not interested in being the Welsh Conor McGregor 12:01
Charles Byrnes’ licence withdrawn after runner ‘nobbled’ with a sedative 12:52
JP McManus Pro-Am deferred for a year due to Covid 10:45
James Harden stars as Brooklyn Nets edge Bucks in thriller 09:17
Spanish player says Australian Open quarantine is like prison 09:06
Crossword Get access to over 6,000 interactive crosswords