Restriction on kick-outs being looked at by GAA 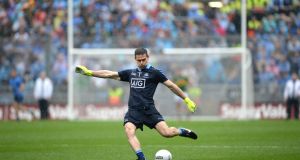 Currently, goalkeepers or whoever is taking the kick-out are permitted to kick the ball the requisite 13 metres but to the side of the goal, allowing an unmarked defender to take uncontested possession. Photograph: Dara Mac Donaill.

The GAA’s standing committee on the playing rules are considering restricting kick-outs in football to eliminate the short, lateral restart that has become commonplace in the modern game.

Goalkeepers, or whoever is taking the kick-out, are permitted under the rules to kick the ball the requisite 13 metres but to the side of the goal, allowing an unmarked defender to take uncontested possession.

Rule 2.7 of the rules of football states that all kick-outs whether after a score or a wide be taken from the 13-metre line and that: “If the goalkeeper is not taking the kick-out, he shall stay in the small rectangle, and all other players, except the player taking the kick-out, shall be outside the 20m line and 13m from the ball, until it has been kicked . . . The ball shall travel 13m before being played by another player of the defending team.”

Jarlath Burns, chair of the standing committee, says that an anomaly has arisen in that players in the corners are both outside the 20-metre line and 13 metres from the ball and the idea of requiring the kick-out to go forward is being considered.

“There is an argument that there is a slip of land on the field where it would be advisable to prohibit a player from receiving a kick-out if you wanted to make the ball go forward. When the rule on kick-outs was changed the rule wasn’t correspondingly changed that the ball had to go forward 20 metres.

“It has been discussed and might be worth looking at. It wouldn’t take a lot to change that but it might have a positive implication.”

The current lateral kick-outs are seen as the first link in the chain of excessively cautious possession football.

Burns also spoke in defence of the mark, brought in at last year’s annual congress, which has been introduced this year and is at present being seen in the pre-season provincial tournaments.

Reaction has been mixed at this early stage with critics saying that the mark – allowing a free-kick to a player who makes a clean catch beyond the 45-metre line – is seldom used and slows down the game.

He said that much criticism had been launched before the idea had even seen the light of day.

“What I would say is that often in these types of situations you get a backlash when something new is introduced. In this case there was a ‘frontlash’ before a ball was even caught. The reaction seemed to unite both constituencies who traditionally oppose change: the ones who say that it doesn’t go far enough and those who believe the game is fine as it is and don’t want any revision of the rules.

“We were aware that the mark would not revolutionise behaviour overnight and that short kick-outs would remain in widespread use. All we were doing was trying to give an advantage to the player that catches the ball because it is a skill of the game.

“The thinking is that – whatever about the current game and we don’t expect a major change – in the next few years a coach of an under-16 team will use a tall fielder to catch the ball and that the possibilities for different types of physiques in the game will be more varied.”

He also said that two other modifications – making kick-outs travel a compulsory 45 metres and restricting the hand pass – had been considered but rejected.

“If the long kick-out were made compulsory, you’d find the full-forward line would have no reason to wait up there. The possibility of a short kick-out forces players to push up or concede possession. You’d end up with everyone dropping back towards the contest area.

“Limiting hand passes was also looked at but John Tobin (also a member of the committee) introduced that for some underage matches in Connacht. He reported that there had been a 67 per cent miscalculation of the hand pass count.

“Now you take into account the different standards of refereeing but that’s all very well until a team wins an All-Ireland by scoring a goal after one too many passes. Referees have enough on their plate.”