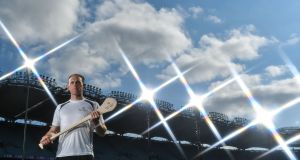 Kevin Moran: “There’s a good feeling there, collectively, that the county and everyone has rowed in behind the team.” Photograph: Brendan Moran/Sportsfile

Bloodied but unbowed, and certainly not embarrassed. That’s how Waterford captain Kevin Moran reflects on their All-Ireland final defeat to Galway and the fortnight or so that has followed.

The experienced midfielder was speaking in front of a large media gathering at Croke Park yesterday, at the launch of PwC’s sponsorship of the All-Stars scheme, and that in itself was noteworthy.

Back in 2008, after he was part of the Waterford team that lost heavily to Kilkenny in the final, he could barely look anyone in the eye for weeks, let alone jump straight into a post-mortem.

He said the disappointment is similar nine years on, but having come up just three points short of Galway, as opposed to 23 in 2008, there are far more positives to cling to this time.

“It’s completely different, 2008 was embarrassing to be straight up about it,” said Moran.

“Your head was down for a long while afterwards. It was the worst six weeks ever, to be honest with you. I think there’s a lot more positives now.

“This time around, even though the result was the same, I think there’s a lot more pride associated with the team. There’s a good feeling there, collectively, that the county and everyone has rowed in behind the team which can only be a positive thing going forward over the next few years.

“That’s definitely something that’s been there this year and victory or defeat wasn’t going to change that.”

Moran made his debut for Waterford in 2006 but is still just 30 and will be back for another year. Michael ‘Brick’ Walsh and reserve goalkeeper Ian O’Regan are both 34 but are the only two expected to seriously consider retirement.

The burning question is whether Derek McGrath, already the second longest serving manager in inter-county hurling, will stay on for a fifth season in charge.

“I genuinely don’t know and I’m not bypassing the question by saying that,” said Moran. “I really hope he stays. We’ll just have to see what happens in the next few weeks.”

Moran and McGrath are teachers at the De La Salle secondary school in Waterford though, so far, the nearest they have come to a final debrief has been pained glances across the staff room.

“Straight up, I wouldn’t talk to him about it,” said Moran. “Everyone wants their space. We would talk about everything else; hurling generally, the club, things like that. I’m sure he’s the same as we all are, hurting, if not more so. It’s very raw for him I’m sure. We just have to give him time and space to clear his head.”

Moran scored 1-1 in the final including a fifth-minute goal that reeled Galway in after they’d opened with four points in a row.

Yet in his quieter moments the memory of a crucial miss in the second half has been to the forefront of his mind. Asked what he has reflected on most, he went straight to that wide.

“I had a fairly simple wide in the second half but, look, if you go too much down that route you will drive yourself demented,” he said. “You just have to put it to one side for the time being and maybe come back at another point and analyse it.”

Waterford led Galway by 2-19 to 1-15 with 14 minutes to go in their league quarter-final tie last April before finishing poorly and allowing Micheál Donoghue’s side to claim a narrow win.

Galway didn’t lose a game all season after that, going on to win the league, Leinster and All-Ireland titles.

“We probably should have held out that day,” admitted Moran of that potentially pivotal league encounter. “I think we just did a few things wrong that day, looking back. But what happened at Croke Park a couple of weeks ago was a completely different game.

“Maybe the league game gave them a boost, looking back now in hindsight, I don’t know, it may have kick-started their season and who knows what would have happened if we’d beaten them. But at the same time, you can never know. You can’t be looking at all those ifs, you would drive yourself mad.”