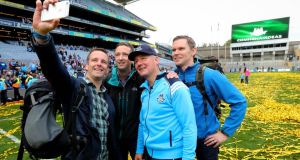 Dublin manager Jim Gavin has a selfie taken with members of the Air Corps who flew over Croke Park before the game, including Capt Sean McCarthy, Cmdt Frank Byrne and Capt Enda Walsh. Photograph: Ryan Byrne/Inpho

It takes a dose of fresh air to remember pure happiness is flooding GAA tributaries from Shankill to Swords.

But this is what winning looks and sounds like. This is Dublin in 2017. Maybe it was also Dublin in 1977. Of course, Kevin Heffernan and Tony Hanahoe only took Sam Maguire home thrice in that decade. This is different, this is better. Possibly sterner.

Someone chances a joke. How’s the heart, Jim?

Dublin are different to Mayo, to every other county, and always will be.

For many reasons. One is they wake in their own beds on All-Ireland final Sunday. They get to eat breakfast with their family. They only make their way to the secret meeting point three hours before throw-in.

The wonder about them is whether winning supersedes everything else?

The high performance answer follows later: No, performance comes first and it takes care of the rest.

Process and protocols cut to the core of their existence.

But three hours before throw-in they are just chiselled men, largely unknown, living on the edge of a capital city.

Seemingly, glory and joy are only bedfellows in the minutes, maybe hours, after victory. Thereafter that warm feeling drops into a void.

“The past is in the past,” Jim Gavin always says. “We never reference it, ever.”

Even this furious game is already gone.

The Dublin manager and his record-setting captain Stephen Cluxton present themselves in similar fashion to Igor Rimsky and Ivan Drago after Apollo Creed was so ruthlessly dispatched in Act 1 of Rocky IV.

“First of all there are a lot of lads in that dressingroom who haven’t three in a row,” Cluxton corrects the unconditioned gallery who must seem so alien to these Spartan athletes and the code they live by. “It is their first. I’ve just been lucky too be around the block a long time. It is a pleasure to play alongside these guys, they are fantastic players.

“I’m just the person who collects the cup.”

Those last few minutes, the agonising ending when Dublin players took hold of time and their markers, holding both tight, what is this composure we see in them?

“Yep, you are on the money with that one,” said Gavin about how the battle was won. “Composure has been the hallmark of these guys. They work so hard at their game. Very disciplined in what they do, the sacrifices they make to play Gaelic games is phenomenal.

“That composure you mentioned . . . when Mayo went two points ahead and had the crowd behind them there is a perception they had the momentum but in the last quarter we probably outscored them four points to one.”

Paul Mannion made it a one-point game on 63 minutes. The magnificent James McCarthy strode forward to level it on 65 minutes. Seconds later, Dean Rock had a sight of goal but calmly punched over the bar.

Cillian O’Connor levelled it up as he did a year before but Rock, via Diarmuid Connolly drawing a free from Chris Barrett, had the last say.

“I missed one in the league final against Kerry,” Rock instantly remembered, “Just glad I got this one. That is my job for Dublin, I put them over the bar.”

Gavin, clear eyed and unemotional, added: “That shows how present the Dublin players were in the game. For them to turn it around and finish so strongly was satisfying.”

Nothing more, nor less. Follow the process and dominance arrives.

Elation is for others. For the city. In a public forum, these men remain relentless and unbending in their pursuit of excellence.

What makes this achievement seem to rise above all the others was Mayo’s tactical superiority. Every play, every forward step Dublin made this summer seemed to happen under the command of Ciarán Kilkenny. But Lee Keegan went to him and refused to let go. Keegan made Kilkenny enter the unknown realm of man marking. Keegan tore clear for the Mayo goal with the largely anonymous Kilkenny in his wake.

Kilkenny was black carded at the end for losing his cool, something nobody knew was possible, with the 2016 footballer of the year.

“Lee Keegan is a big player for Mayo but if they decide to man mark Ciarán that’s their decision but I thought Ciarán did well in the game,” said Gavin. “Ultimately we got the result so we are happy.”

It’s all and only about winning then, Jim, nothing more?

“We always go after performance,” Gavin replied. “We always try to perform. You will never get that right in the game.”

Gavin had just been asked about clashes between Dublin and Mayo players as David Clarke sought a short range outlet to launch one final attack.

“But once they put the jersey on they are playing for Dublin the best way they can.”

This cannot be disputed. Not anymore. Emotion is for also-rans.

Zoom calls with Rory and the GUI bake-off: Neil Manchip keeping the flag flying 06:00
Sonia O’Sullivan: How to keep your competitive edge from going blunt 06:00
Safe return to play in New Zealand showcases the true value of sport 06:00
Dr Bob Rotella: ‘If you focus only on the target you’ll play darn good golf’ 06:00
Dave Hannigan: Trump gets the clubs back out as death toll keeps rising 06:00
Crossword Get access to over 6,000 interactive crosswords