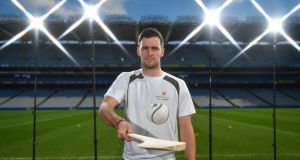 David Burke at the announcement of PwC’s sponsorship of the GAA/GPA All-Stars scheme for four years. Photograph: Brendan Moran/Sportsfile

Given where he has come from, you might expect All-Ireland-winning Galway hurling captain David Burke to look across the border into Mayo and urge them to keep the faith.

Until earlier this month, Burke and his Galway colleagues were in the exact same position that the Mayo footballers find themselves in now; looking to bury a painful All-Ireland hoodoo that has gone on far too long.

Burke watched Mayo’s one-point final defeat to Dublin last Sunday, their third by that margin since 2013, and their fourth final loss in six years, like everyone else. Yet while he ultimately experienced the joy of success after two previous final losses with Galway, in 2012 and 2015, his immediate reaction to Mayo’s woes wasn’t exactly inspiring.

“They’ve obviously been in more finals than us – Jesus, if I was them, I don’t know what I’d do, to be honest,” said Burke. “I suppose, with us, when we lost to Tipperary last year, all you wanted to do was get back to the summer again and to championship hurling.

“It’s just the thought of all the training again. And you enjoy that, but you just want to get back to where you can have the biggest impact on the championship.

“I think they just have to keep with it. Dublin have obviously done three-in-a-row, I don’t know what’s going to happen with them, they could get even better, but if Mayo stick with it, it might just be their time next year or the year after.”

Burke said that reaching the promised land, for Galway, was ultimately about being mentally stronger and he believes it’s probably the same for Mayo.

“It was for us anyway,” he said. “It was down to a real drive and will to win. A lot of lads took ownership of that and matured a lot in the 12 months since playing Tipperary last year as well.”

Pádraig Harrington, the three-time Major winning golfer, always maintained before winning his first that he was chasing ‘Majors’, stressing the plural. He had witnessed too many great players drop their standards after winning one and realising their life’s ambition.

Ciarán Cosgrave, who was helped out with Galway’s psychological conditioning this year, would endorse that thought process and it’s the same now for Burke and his team-mates as they eye 2018.

The 27-year-old midfielder is confident that, after waiting nearly 30 years for their breakthrough, they can back it up next year though Tipperary had similar notions at this point last year.

“A big advantage for us going into next year is that we are in Division 1B of the league, as opposed to 1A, so we can try out more players and integrate them into the team that way,” said Burke.

“That sounds unusual, to be looking forward to the lower tier, but it definitely is helpful. You are not under as much pressure to get results either, you can actually give players a run.

“Personally, I think there should be a rule whereby every player has to play a certain amount of time in the league anyway, because it has gone way too competitive. You see teams, even the football counties, just fall apart once the league is over, going into the championship. So I’m looking forward to that buildup for us.” PwC will sponsor the GAA/GPA All-Stars scheme for the next four years.