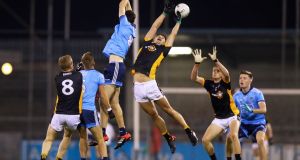 Eamon Donoghue of The Underdogs challenges for the ball with Darren Gavin of Dublin during a challenge match at Parnell Park. Photograph: Tommy Dickson/Inpho

Every dog has its day, but it wasn’t to be for the TG4 Underdogs, who came up against a powerful Dublin side under floodlights last night as reality TV came to Parnell Park.

A crowd of 4,000 spectators watched on as 28 men from clubs around Ireland – and indeed the well travelled Michael Molloy from Liverpool – were keen to make their mark, perhaps write some wrongs of the past. For others it was about cementing their future, and the urge to line out for their county teams at senior level.

And it wasn’t just the Underdogs who were keen to impress their county managers.

On the night, Skerries Harps clubman Stephen Smith was a colossus for Dublin, scoring goals, creating chances, and linking up well with players like the experienced Conor McHugh in attack.

The 21-year old was a deserved man-of-the-match on a night where Dublin fired 5-17 past the Underdogs, with the side managed by Paul Clarke getting their goals through Smith (two), Cormac Diamond, Gerry Seaver and Conor Halpin.

Smith was not the only one with his hand up to try and grab a place on Jim Gavin’s squad for the 2019 league.

Just three of the All-Ireland winning team started, with Michael Fitzsimons and Eoin Murchan joined by Jonny Cooper, who captained the side.

If the Dubs were keen to impress, for the Underdogs one man rose above the rest time and time again, and got the bruises to show for it also.

Galway’s Fintan Ó Cuanaigh, one of just two Gaelgeoirs on the squad, put his body on the line time and time again and was by far the Underdogs’ best player.

Indeed the west was truly awake with goalkeeper Blake Forkan unfortunate to leak four goals after pulling off some outstanding saves also.

What about Athlone man Richie Greene – one of the stars of the show – the joker of the pack, a man not lacking confidence. His ego definitely inflated after scoring a late penalty goal against the Dubs – he’ll live off that one for a while yet.

The last word to a man who wrote plenty of words about the Underdogs in recent weeks, The Irish Times’ own Eamon Donoghue.

A former Roscommon minor and under-21 player, he certainly was a busy man in the midfield sector. He mixed it well with the Dubs, and while many say journalists are fans with typewriters, don’t be surprised if he picks up a Connacht crown alongside the likes of Murtagh, Shine and co in the coming years.