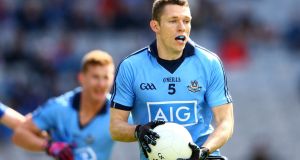 Darren Daly has retired from the Dublin football panel due to recurring injuries. Photograph: Cathal Noonan/Inpho

Darren Daly has retired from the Dublin football panel at the age of 33. The versatile defender was the first player from his club Fingal Ravens to win a senior All-Ireland medal and having made his championship debut in 2013, against Westmeath, went on to win six.

The ultimate squad player, he was called into action in five All-Ireland finals, including both draw and replay against Mayo in 2016 in both the full-back and half-back lines.

In a statement released through the Dublin county board, he said that he had taken the decision after a number of injury issues.

“I’ve had an incredible journey with the Dublin senior football team over the last 12 years.

“I’ve tried to push the body one more time but unfortunately it’s not to be. With a number of recurring injuries over the past few months, it’s now the right time for me to step away.

“Firstly, I’d like to thank my family, and particularly my wife Sarah who sacrificed more than anyone to allow me to compete at this level year after year. I’m extremely grateful to have got the opportunity over the years to share some very special moments with my three kids Tadhg, Caolán and Odhrán.

“In particular I’d like to thank my team-mates. I am extremely lucky to have been part of such a successful team. I’m grateful to have learned so much from being with them, made so many friends for life, and have some of the best memories imaginable.

“I’d like to thank the managers, selectors, coaches and physios who guided and pushed me along the way.

“Thank you to the dedicated supporters who always created that unique atmosphere, and were there when we needed them. Finally, I’d like to thank my club Fingal Ravens for their support and encouragement over the years.”

1 Bennett girding his loins for impossibly unpredictable Vuelta
2 Stockdale and Ringrose on board with expansive Irish game plan
3 The Offload: Spectre of doping hangs heavy over South African rugby
4 Wayne Rooney ‘seething’ after visit from a friend who tested positive for Covid-19
5 Lewis Hamilton’s place in the GOAT debate can’t be argued
Real news has value SUBSCRIBE