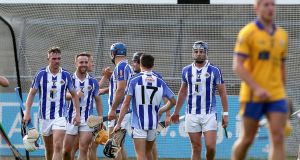 There’s county final weeks and there’s county finals weeks. Around the mid-Tipperary parish of Loughmore-Castleiney, through the estates and parks of Ballyboden and Rathfarnham and Firhouse in Dublin, a week like this would normally be humming. Both clubs in a senior county hurling final on Sunday, both in a senior county football final next weekend. Where would you get it?

In Covid world though, this is another little slice of life that has been diced even further. The Dublin county board began the week hoping that crowds at matches might be raised to 500 and were even prepared to delay Sunday’s final by 24 hours if the new measures were being held until Monday. Instead, the move to Level 3 means their showdown with Cuala will be behind closed doors.

Down in Tipp, Semple Stadium will at least be able to usher a crowd of 200 through the gates for Loughmore-Castleiney’s final against Kiladangan. It’s not a lot but it’s something. As club lifer Tom McGrath puts it, their 100 tickets will account for nearly one-seventh of the total population of the parish. One-seventh of Ballyboden’s catchment would fill Parnell Park twice over.

In the broad sweep of the GAA, you would struggle to pick out two more contrasting club models. As The Herald reported a couple of weeks back, Ballyboden St Enda’s currently have 172 teams playing under their banner – almost certainly making them the biggest sports club in Europe. The hurling and football sides of the house are more or less separate clubs in their own right. There is some crossover but you wouldn’t want to overstate it.

“But from a structural and organisational viewpoint, they are separate entities. They are almost their own clubs. The co-operation between both clubs is there because there’s always going to be crossover with some of the best players in both teams.

“There’s always going to be conflicting situations and it’s difficult at times. No matter how amicable things can be, there’s always a bit of conflict there. With Ballyboden, we have a slight luxury in that we have plenty of players to fill out both squads. We only have about five players crossing over. And of them, Conal Keaney would be the one starter, with Simon Lambert coming off the bench a good bit.”

Things couldn’t be more different in Loughmore-Castleiney. At least 11 of Sunday’s hurling team will start the following weekend’s football final. In all, there are 16 players who turn out for both panels. Not alone that, the two teams are managed by the same man, Frankie McGrath.

“It was a thing we started around 2011,” says Tom, his brother. “There had been times when you’d have two different managers and one would be a football man and the other wouldn’t. And of course there’d be the odd row, it’s only natural that there would be because we’ve such small numbers.

“When you have as small a pick as we have in the parish, you basically need lads to play both codes. These lads all do it, their fathers all do it. I played both in my time and my father did the same. We haven’t enough to support two teams if lads decided just to concentrate on one thing.

“So around nine or 10 years ago, we decided to link up the management of the two teams. We won the double in 2013 and got to the two finals again the following year. It seems to have worked well ever since so we never thought to change it.”

By birth and blood, Loughmore are a football club that plays a bit of hurling. Their club ground is called Páirc Uí Riain, in honour of clubmen Bill and Jim Ryan who both played for Tipperary on Bloody Sunday 100 years ago. They had six county football titles gathered up before they reached their first hurling final in 1983. Only Clonmel and Fethard have been football champions more times, whereas they’re 10th on the hurling roll of honour.

But over the past 40 years, they have become a heavyweight in both codes. The current crop is based on a bumper juvenile year in 2002. They won the hurling and football double at both under-12 and minor that year and 18 years later, their county final panels are backboned with the players from those teams.

The mad, bad summer of 2020 has given them their head. The same applies in the city, where Boden’s crop of county players and occasional footballers have overcome an opening day hiding from Kilmacud to still be standing for the final. Travers remembers going home from that first game thinking it might be very short championship – they’d taken a thrashing from Thurles Sarsfields the previous week in a challenge game. But thanks in no small part to Keaney, they’ve found their way back.

“You’re talking about in Conal’s case, someone who has been through the mill and who is a go-to guy on both teams,” said former Wexford wing back Travers. “He’s a unique animal in many ways. We might not see him for a week or two because of the football but it’s never an issue. He just goes and does his business, he just produces constantly for both teams. It’s a unique scenario because he’s done it at club and county level in both codes. He’s 38 years of age. That’s fair going.

“When you’re talking about county players, you’d find with a few of them that either the club football or hurling team would have been the third team they’d be involved in. And by the time they got to it, they’d be after a long year at intercounty and then a big championship push with their main sport. Also timingwise, they’d be getting to it in late October or whatever. So with the best will in the world, they’d be coming to it carrying a bit of wear and tear.

“It’s the opposite this year. You look at the club games on TV, there’s so much entertainment in them. It’s a unique season and you have so many players bouncing off the ground and in great nick. It has brought the best out of players. Physically and aerobically, they’re different sports and for fellas to be able to go between the two, it takes a serious kind of player.”

Nonetheless, here the two clubs stand. Both of them go into their respective finals as underdogs in both codes. The Dublin football final is a marginal call, as is the Tipp hurling decider. You’d imagine one of them will find at least one win somewhere along the way.

And if they don’t, they’ll keep at it. The weight of numbers in Ballyboden ought to ferry them to a few finals in either code most decades. They’re one of two Dublin clubs, along with St Vincent’s, to have done the double in their history. It won’t be a massive surprise if they manage it again somewhere along the way.

Loughmore-Castleiney are the only Tipperary club ever to double up, having done so seven years ago. If they don’t manage it again in the next couple of years, McGrath wouldn’t be confident of guessing when the next one would even be plausible.

“We’re the story of all rural clubs,” he says. “In the ’60s and ’70s, you had big families, teams made up of lots of brothers and cousins. There was a move in the country towards secondary education as well so a lot of boys in the area went to Thurles CBS or Our Lady’s, Templemore. So lads that were footballers were exposed to higher standards of hurling in the Harty Cup and that led to better hurling teams from the ’80s onwards.

“But the progression from that over the years has inevitably meant that third-level is the next step. And between getting better qualifications, travelling away, work in the city, fewer and fewer came back to settle here. Families have also got smaller so whereas before you might have had five brothers, now you have two. And planning is a problem too for young lads that want to come home and build a house where they grew up.

“So when you add it all up, when I look down the line into the next 10 years, it’s very hard to see where the numbers will come from. It’s the same in all rural areas. We just have to enjoy it while it lasts.”

Two clubs. Four goals. A multitude of ways to achieve them.